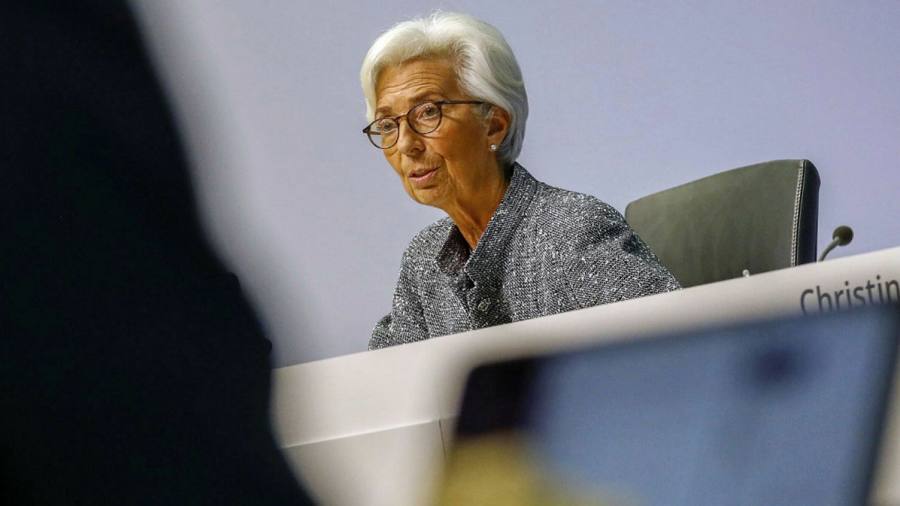 The eurozone economy will shrink by 8 to 12 per cent this year as the “sudden stop of activity” caused by coronavirus triggers a recession twice as deep as after the 2008 financial crisis, European Central Bank president Christine Lagarde has warned.

Ms Lagarde told students on a live webinar on Wednesday that the bloc faced “a massive economic crisis and one that was literally unheard of in peace time for the damage it is causing”.

The ECB president, who will next week announce the central bank’s latest monetary policy decision, said the “mild scenario” outlined by the ECB earlier this month for a 5 per cent contraction in the eurozone economy this year was “in my humble view already outdated”.

The eurozone economy was “very likely” to end up “somewhere in between the medium and the severe scenario”, she said, meaning it would contract by between 8 and 12 per cent. The bloc’s economy shrank by 4 to 5 per cent after the financial crisis over a decade ago, she said, adding: “Here we are talking about probably double that.”

Asked whether she thought the single currency zone was heading for another financial crisis, Ms Lagarde said this was unlikely, pointing out that while many countries were raising extra debt in response to the pandemic, this was sustainable because low interest rates made the costs manageable.

She added: “I am not overly concerned about the increase in debt.”

However, Ms Lagarde said the “sudden stop of activity that has slowed down the pace of life, the pace of growth, the creation of value . . . will have lasting effects despite all the measures we are taking”.

“Of course it will be remedied and we will find ways to move to a new stage and to a new form of economy,” she said. “But we are now going through the immediate consequences on the economic front of that health crisis.”

Ms Lagarde warned that some countries would emerge from the pandemic in better shape than others, and said this would depend on how much “fiscal space” they had to fund their pandemic response as well as their exposure to the hardest hit sectors, such as tourism.

Many investors anticipate the ECB will next week step up its support for the economy by adding at least an extra €500bn to its asset-purchase plans for this year in its monetary policy conference meeting on June 4.

Isabel Schnabel, executive board member of the ECB, gave the clearest signal yet that it was preparing to expand the €750bn pandemic emergency purchase programme it launched in March by telling the FT this week that “if we judge that further stimulus is needed then the ECB will be ready to expand any of its tools”.

The ECB is also due to publish its updated economic forecasts next week. In March, it forecast that the eurozone would grow by 0.8 per cent this year, down from a six-year low of 1.2 per cent last year, before recovering to 1.4 per cent in 2022.

But those forecasts were mostly made before the pandemic and resulting lockdowns brought the economy to a halt in the second half of March. The IMF said last month that the eurozone would be one of the hardest hit regions of the world economy, shrinking by 7.5 per cent this year, and then growing by 4.7 per cent next year.

In the first three months of this year, which only included a few weeks of the lockdowns being in place, the eurozone shrank by a record quarterly rate of 3.8 per cent as Germany, France and Italy all fell into recession — which is defined as two consecutive quarters of negative growth.

French economic activity has picked up from its lows at the height of the lockdown, according to separate data published on Wednesday by the national statistics agency, although the country remains on track for a severe recession. Activity post-lockdown was 21 per cent below normal, compared with 33 per cent at the start of May, it said.

The improvement was helped by a rebound in consumption that may be partly temporary as shops and businesses other than bars and restaurants reopen; consumption after May 11 was down just 6 per cent from pre-crisis levels.