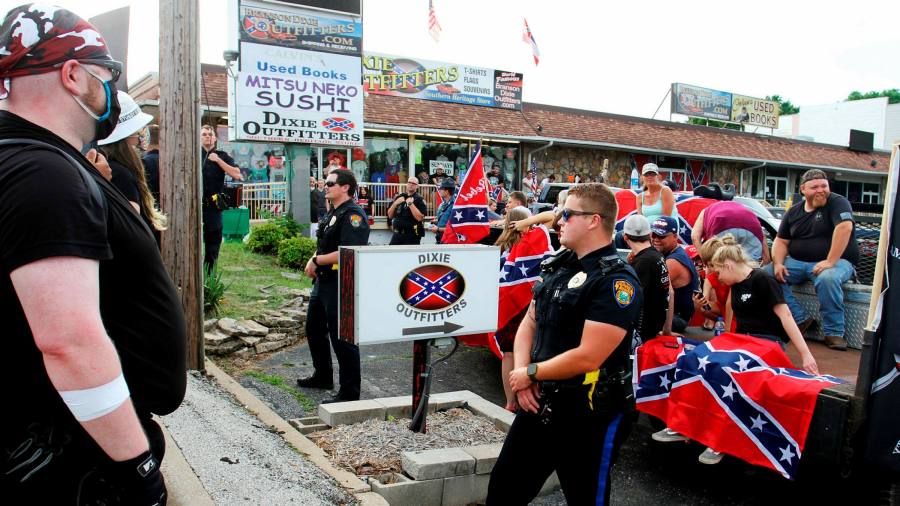 Once in a while America’s former slave states resemble one of those horror movies in which the monster keeps lurching back to life. There have been endless sequels to Nightmare on Dixie Street. None, however, is quite as far-fetched as the film Donald Trump is trailing.

More than a century and a half after the south’s defeat, a Yankee president is sticking up for defeated Confederates. Those wishing to tear down their statues “hate our history, they hate our values and they hate everything we prize as Americans”, Mr Trump said this week.

Not since Woodrow Wilson has a US president been quite so praiseworthy of America’s defeated enemy. The fact that Mr Trump can do so this boldly is a measure of the US civil war’s unfinished business.

Most civil wars either end in a new national consensus after a passage of time, or in outright separation. An example of the first is the English civil war of the 1640s, which ended kingly rule but later restored the monarchy as a symbol. An example of the second is the Pakistan civil war of 1971 that resulted in the creation of a new country: East Pakistan, which became Bangladesh.

The outcome of America’s bloody schism resembled neither. The slave states tried and failed to secede. Their defeat left America with the task of inculcating the south into the union. Unfortunately politics and the courts got in the way of that process. They often still do.

“The slave law of the south may have been dead,” wrote one 20th century black writer. “But it ruled us from the grave.” George Floyd’s suffocation by police last month is one of those rare moments where white America wakes up to how little has changed.

The reaction to Floyd’s recorded asphyxiation is on a par with milestones in the story of America’s racial injustice: the horrific 1955 murder of the 14-year-old Emmett Till in Mississippi; Rosa Parks’s boycott of Alabama’s segregated buses a few months later; and the murder in 1964 of three activists — James Chaney, Andrew Goodman and Michael Schwerner — by the Ku Klux Klan.

Each was a defining event that helped to pave the way for the civil rights revolution. Yet each outrage — like Floyd’s murder — was almost routine.

Floyd’s killing came amid the frustration of the Black Lives Matter movement that began during Barack Obama’s presidency but had been going backwards under Donald Trump.

Each moment awoke the world to the depth of the underlying problem, though Mr Trump will not acknowledge any problem exists. In the past month there have been countless Black Lives Matter protests from Australia to Antwerp. There have been multiracial marches across America from Maine to Hawaii, including in white small towns.

“There is nothing since Martin Luther King’s murder [in 1968] that has been quite like this,” said Carol Anderson, author of the White Rage, a book that came out four years ago that has shot back on to The New York Times bestseller list.

In an echo of Richard Nixon in 1968, Mr Trump is campaigning on a law and order platform. But conditions are different today. Unlike Nixon, Mr Trump is already in office. The buck stops at the White House, even though it remains fenced in against mostly peaceful protesters whom Mr Trump has called “killers”, “domestic terrorists” and “thugs”.

This month he rejected calls to rename military bases that commemorate civil war enemies, such as Fort Hood, Fort Bragg and Fort Benning. All 10 such bases are in former slave-owning states.

Mr Trump’s dismissal of a proposal backed by US military figures gives even optimists pause. The fact that the US still honours men who fought against the stars and stripes in a war that killed more Americans than in the two world wars combined is a reminder of what is at stake.

Yet it works both ways. By making the stakes so explicit, Mr Trump is unwittingly offering America a once-in-a-generation chance to end its myopia on the Confederacy. “We de-Nazified Germany,” said Ms Anderson. “We never de-Confederalised the south.”