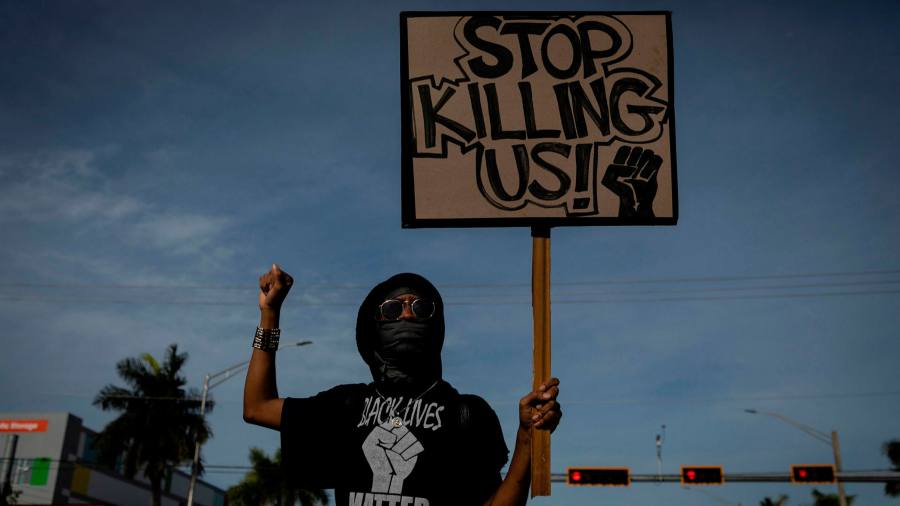 Protests over the police killings of George Floyd and other unarmed black men and women have spread to US boardrooms, prompting dozens of executives to express solidarity and vow to address inequalities in their companies.

Business leaders have become less wary in recent years about speaking out on the country’s most divisive social issues, from immigration to gun control. Floyd’s death under the knee of a Minneapolis police officer has elicited an unusually broad and vocal response.

“Even though I’m the CFO of a global bank, the killings of George Floyd in Minnesota, Ahmaud Arbery in Georgia and Breonna Taylor in Kentucky are reminders of the dangers black Americans like me face in living our daily lives,” Mr Mason said, also referring to other recent cases.

Across social media, the US’s disproportionately white group of company leaders pronounced themselves “allies” in the fight against inequality and declared that “black lives matter”.

Randy Garutti, chief executive of fast-food chain Shake Shack, said on Instagram that he was “fully aware of my station in life as a white leader” and the need to use his platform for change.

Evan Spiegel, CEO of Snap, the social media group behind Snapchat, told employees in a memo first reported by The Information that the US should establish “a diverse, non-partisan commission on truth, reconciliation and reparations.” The idea of paying reparations to African-Americans for the legacy of slavery has been gaining currency among some Democrats but had found very few CEO supporters. Mr Spiegel said the US had “plenty to learn from those who have had the courage to undertake a similar process following atrocities around the world.”

Some companies devoted their advertising resources to responding to the crisis, with Nike — whose usual slogan is “Just Do It” — distributing a video telling Americans: “For once, Don’t Do It. Don’t pretend there’s not a problem in America.”

Adidas broke with the two shoemakers’ usual rivalry by retweeting the ad with the words: “Together is how we make change.”

Google, meanwhile, delayed a June 3 product launch event, saying “now is not the time to celebrate”.

Several chief executives announced donations to groups fighting injustice, straying into topics — from racism to police brutality — that business usually shies away from.

In a string of tweets, Slack chief executive Stewart Butterfield called for reforms to police training, lamenting cases of “outrageous initiation or escalation of violence” by some officers while highlighting others who joined peaceful protests. He said he would use Slack’s earnings call this week “to amplify black voices”.

Rick Smith, chief executive and founder of Axon Enterprise, which sells Taser stun guns to police forces, expressed empathy for those angered by the “indefensible use of force” that led to Floyd’s death.

“We will listen and continue to learn how we can be a part of fixing what is broken,” he said.

Dara Khosrowshahi, chief executive of Uber, said the ride-hailing company stood in solidarity with the black community and with peaceful protesters. Uber would donate $1m to two groups working to make the US criminal justice system more equitable, he said.

The Business Roundtable, a leading Washington lobby group, captured many executives’ concerns about the impact of the killings on their own staff from racial or ethnic minorities.

“As the employers of more than 15m individuals of all backgrounds, whose diversity strengthens our institutions, Business Roundtable CEOs are deeply concerned about the racial bias that continues to plague our society,” it said.

Kevin Johnson, Starbucks’ chief executive, said 2,000 employees had joined an online forum he called over the weekend “to make sense of what is happening in our society”. Two years ago, Mr Johnson put staff through anti-bias training after a manager called the police to remove two young black entrepreneurs from a coffee shop in Philadelphia.

Other business leaders resolved to strengthen their commitment to diversity and inclusion, with many companies facing pressure to explain why their senior ranks remained dominated by white men.

Disney’s chairman, chief executive and chief diversity officer said the media group would strengthen its commitment to diversity and inclusion, exploring the underlying issues “for as long as it takes to bring about real change”.

Jim Fitterling, chairman and chief executive of Dow, said it aimed to be the world’s most inclusive materials science company. “I will be calling on our leadership team to ensure we are in fact doing all we can to effect change” to a culture created by “hundreds of years of systemic oppression”, he said.

“Our president has no ability to help this nation heal or chart a path forward. He’s spent years stoking tensions that helped amplify today’s pain,” Mr Levie wrote in a tweet.

Paul Polman, former chief executive of consumer goods group Unilever, said business leaders “must take a lead role, not just because the injustice of race has corroded any semblance of a civil society, but because we must create a just and equitable economy”.

Erin Thomas, head of diversity, inclusion and belonging at Upwork, told company leaders that tweets expressing solidarity and donations to public causes were “great”, but “please also know that they’re not sufficient for uplifting your black employees”.

This story has been amended to remove a reference to Wes Moore, who runs the anti poverty group Robin Hood not the similarly-named stock trading app.