Commercial paper has lost its fizz. Dozens of blue-chip companies including Coca-Cola and PepsiCo, which have long relied on the market to raise cash, are paying off tens of billions of dollars of borrowing in favour of new longer-term facilities.

The withdrawal from the $1.1tn commercial paper market, typically used by companies to finance payroll, inventories and other short-term obligations, came swiftly after fears over coronavirus took hold.

In total, more than 40 companies have raised a combined $97bn in debt this year, in part to refinance CP, according to data provider Refinitiv. That marks a record high and comes close to surpassing the $105bn borrowed in all of 2008 and 2009 during the previous financial crisis.

In turn, CP issued by companies outside the financial industry has dropped to its lowest level since 2016, figures from the US Federal Reserve showed last week.

The move by corporate treasurers to secure other sources of funding was prompted by turmoil in the CP market in March, when some investors refused to lend for maturities longer than five days. Companies at first drew down credit lines with banks to bolster their cash reserves, and then began to issue longer-term bonds after a series of interventions from the Fed helped to stabilise credit markets. 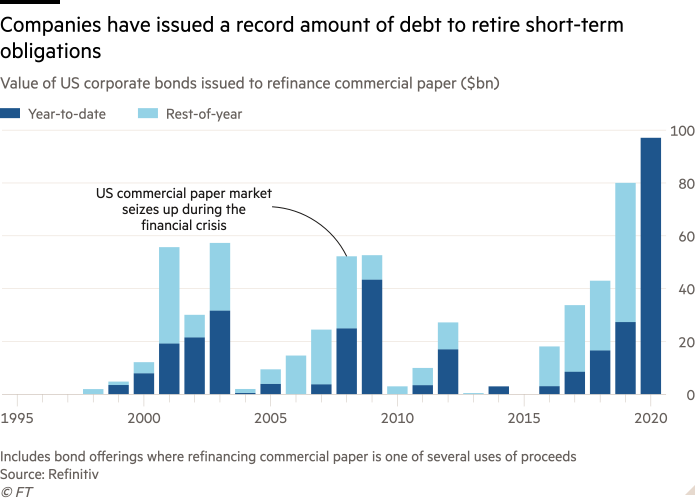 The Fed’s backstops included the CP market, where it launched a facility to lend to companies on a short-term basis. But advisers on Wall Street warned that another market downturn could cause funding to dry up once more.

“We don’t have the ‘all clear’ signal just yet so the practical path is to go out and obtain [long-term financing],” said Kevin Foley, global head of debt capital markets at JPMorgan Chase.

“[CP] was the first market impacted and companies are not going to look prudent to go right back to it, if you have these other options.”

Disney, which raised $11bn through bond markets in May and had $8.5bn of CP outstanding in late March, said it had judged it “appropriate to term out some debt given the attractive level of rates and the uncertainty that remains in the financial markets given Covid-19.”

The sharp drop in US Treasury yields has also encouraged companies to shift from CP, which has maturities of up to 270 days, to longer-term debt. Meghan Graper, head of US investment-grade syndicate at Barclays, noted that several companies that have refinanced CP have secured record-low costs of borrowing in the bond market.

Pfizer’s new $750m five-year bonds carried an annual coupon of just 0.8 per cent, for example. The drugmaker had more than $14bn of CP outstanding on May 1, with an average annual interest rate of 1.43 per cent.

Other highly rated corporate borrowers in the CP market have secured 90-day funds at annualised interest rates of between 0.15 per cent and 0.48 per cent over the past fortnight.

“Overall it is more efficient to finance for two to five years than it is to do so in the commercial paper market,” said Guy LeBas, a strategist at Janney Montgomery Scott. “With the yield curve so low in absolute terms, from a treasurer’s standpoint, it is a lot safer to secure funding [elsewhere].”