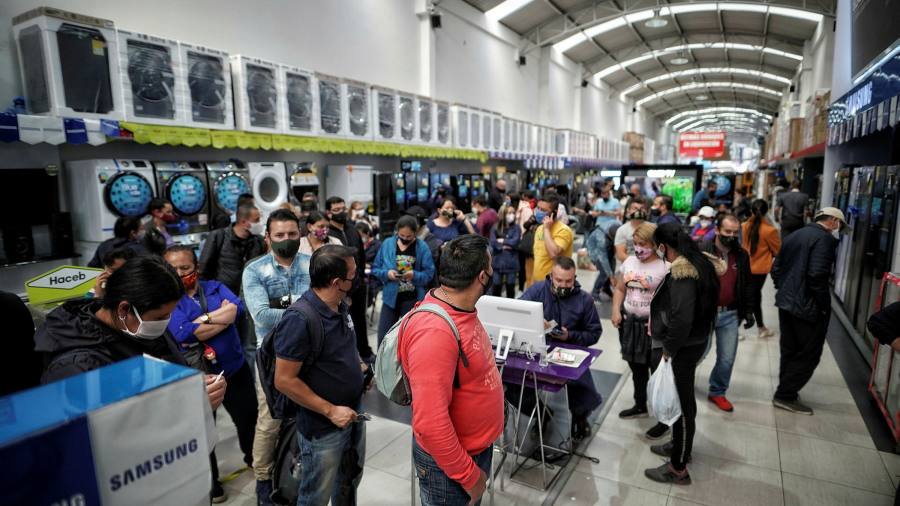 The Colombian government is under pressure to scrap one of its more eye-catching economic policies after it prompted shoppers to flout social distancing rules in their rush to buy clothes, televisions and other consumer goods.

Th government had declared Friday a “VAT-free day”. For 24 hours, value added tax, which in Colombia is set at 19 per cent, was suspended on all retail sales.

After months in lockdown, Colombians flocked to shopping centres to pick up bargains. There were long queues outside some stores and social media was flooded with images of people jostling to enter shops and hauling away TVs and other consumer goodies. Most seemed to be wearing masks but in many cases social distancing was non-existent.

President Iván Duque proposed the VAT measure late last year and congress approved it. But that was before coronavirus.

As the disease spread throughout Latin America from March onwards, some critics urged Mr Duque to abandon or at least postpone the plan.

The government pushed ahead and said that — economically at least — Friday was a success. Trade minister José Manuel Restrepo said 73,000 outlets opened, with crowding at only 85 of them. He said sales across Colombia had been five times higher than on the corresponding day last year.

Many shoppers opted to buy online. Mr Restrepo said online sales were 18 times higher than on a normal shopping day, while acknowledging some websites had struggled to cope with demand.

Mr Duque said most people observed social distancing although he acknowledged there had been “crowds” and “disorder” at some outlets. He said in some cases “citizen behaviour was not good enough” and vowed to “learn from the lessons” of the day.

For now, and despite coronavirus, the government plans two more “VAT-free days” on July 3 and July 19, although Ms López urged the president to backtrack and limit the measure to online shopping only.

Leftwing senator Gustavo Bolívar accused the president of effectively “pushing people towards suicide” by enticing them to shop in the middle of a pandemic and said the consequences would be seen in 20 days time with a spike in coronavirus numbers.

The figures are already rising sharply in Colombia which until now has escaped the worst of coronavirus in Latin America.

It has reported over 60,000 cases and 2,000 deaths — low figures per capita compared to its neighbours Brazil, Peru and Ecuador.

But on both Thursday and Friday, the number of confirmed new cases topped 3,000. Previously, the record for one day had been fewer than 2,200. Epidemiologists say that while the outbreak seems to have peaked in places like Ecuador, in Colombia the worst may be yet to come.

The rightwing government says the VAT-free days are a good way to stimulate an economy that contracted 20 per cent year-on-year in April in the wake of the virus and the lockdown.

On social media some people ridiculed those who risked their health by rushing out to shop for non-essential goods amid the pandemic.

“You can’t take that 50-inch-screen smart TV into the intensive care ward with you,” one observer noted on Twitter.