The Covid-19 crisis has taken a big bite out of the chocolate market, causing a collapse in demand that has sent cocoa prices sharply lower and created “disastrous” conditions for farmers.

The New York benchmark for cocoa beans has fallen by almost a quarter since its February high, hitting a 15-month low of $2,150 a tonne earlier this month. Though prices have recovered a little in recent days, hedge funds have continued to increase their bets against the commodity, moving into their biggest net short position this year.

Shifts in supply patterns are normally the cause of fluctuations in cocoa prices. But the virus has shifted attention to demand, as Covid lockdowns disrupted sales of chocolate at airports, hotels, restaurants and speciality boutiques.

As a result, global “grindings” — the amount of cocoa processed by the industry — fell by 8.2 per cent in the second quarter, according to data from industry associations. That was the largest year-on-year decline since 2014.

The world’s biggest chocolate companies reported falls in their second-quarter sales, with Lindt, the Swiss chocolatier, predicting comparable sales will be down 5-7 per cent for the full year. 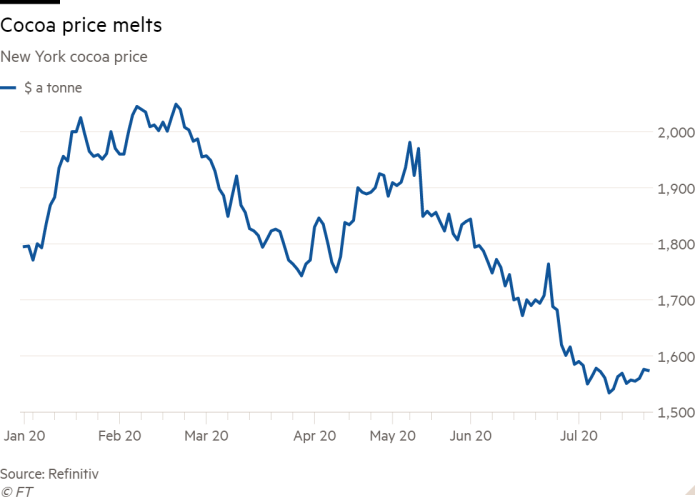 The economic downturn is a threat to the outlook, analysts say, as is the risk of new flare-ups in Covid infections that prompt further restrictions on movement and travel. Mr Rawlings said cocoa demand was unlikely to start growing again until the 2021-22 crop year, assuming a “complete relaxation” of social-distancing measures.

This uncertainty is making bargain hunters wary, say commodity traders. Processors have stocked up during the crisis, raising concerns that unusually big inventories will continue to weigh on prices. “The consensus among traders is that the industry holds about 10 months’ worth of forward cover,” said Eric Sivry at the commodities broker Marex Spectron.

Producers, meanwhile, are playing a waiting game. The Ivory Coast and Ghana, the two biggest producer countries, normally sell their upcoming crop ahead of the harvest starting in October, but are holding out for better prices, according to people in the market.

The pandemic has already created a crisis for farmers, said Nestor Yao, president of the Capressa farmer co-operative, which represents about 3,200 farmers in Abengourou, in eastern Ivory Coast.

The country’s borders have been shut for four months because of the pandemic, keeping foreign farm workers out — and leaving much of the pruning and weeding work undone.

“We can’t do farm work the way it should be done so production will be [affected],” Mr Yao said. The impact on farmers is “disastrous”, he added, affecting their ability to buy food, house their families and pay school fees for their children.

The fall in bean prices has also fed worries about whether a price premium levied on international buyers by Ivory Coast and Ghana will actually reach the farmers the money is supposed to support.

In order to reduce poverty and child labour, the two governments — which account for more than 60 per cent of the world’s cocoa — agreed last year to demand a $400-a-tonne premium, to be added on cocoa harvested from the crop year starting this October. Politicians called the cartel “Copec”, reflecting the pair’s ambition to use their market share to influence prices in the same way as producers of crude oil.

Michiel Hendriksz, a former cocoa executive who now runs FarmStrong Foundation, which works on sustainable agriculture programmes in Ivory Coast, said the premium was a mistake. It had already been discounted in the price buyers were willing to pay and was depressing demand that had already been hit hard by the pandemic, he said.

Despite the challenges facing the market, betting against the crop is risky, say traders. “Cocoa isn’t a crop where investors like to be short for too long,” said an executive at a leading trading house, speaking on condition of anonymity. “It’s a fickle crop; in the biggest producers it’s a bit of a disorganised crop. The supply risks are [normally] much larger than demand risks,” he added.

Traders are increasingly focused on the ballot box. The Ivory Coast has an election in October and Ghana in December. Cocoa prices are sensitive to any political volatility in the region and any sign of a disruption to supply could trigger a rush among investors looking to cover their short positions, traders say.

But the end of the year, which includes the holiday season, will also be a crucial test for demand.

Marcia Mogelonsky, analyst at the consumer data research firm Mintel, said the “focus on emotional wellness” in lockdown was good news for sales of comfort food. But with gatherings and travel still disrupted, the upmarket segment would continue to struggle. “A classy, fancy tray of truffles you hand select — that’s not happening,” she said.