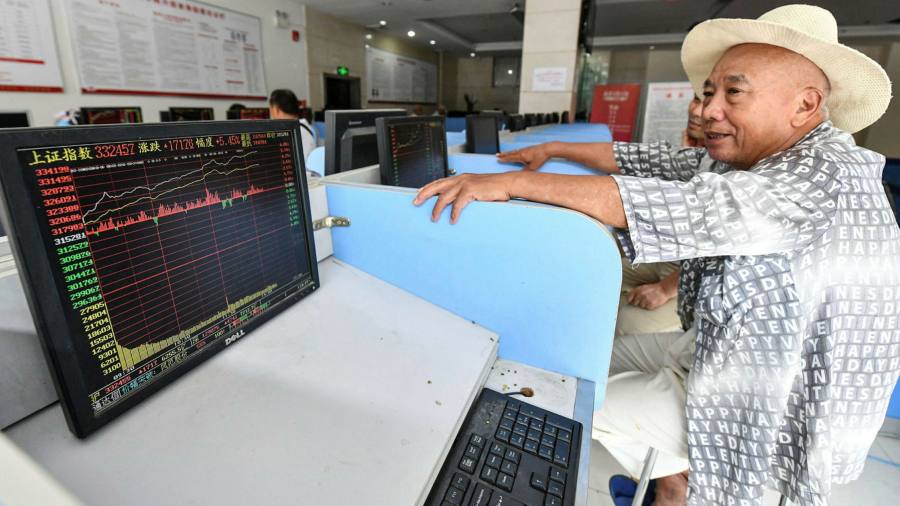 While China’s state-backed media celebrates the country’s biggest stock market rally in more than a year, investors with longer memories may recall a painful lesson from 2015: stock price surges that are not accompanied by climbing industrial profits can end in tears.

Back then, a chorus of official cheerleading and easy money bid up the main Shanghai stock index by about 150 per cent between June 2014 and June 2015. But then it collapsed and within less than a month it had slumped by 32 per cent.

Then, as now, industrial profits were lacklustre. “Equity prices are rising far above levels implied by their historical relationship with earnings,” Thomas Gatley, an analyst with Gavekal Research, a research company, wrote on Monday. “The prospects for year-on-year earnings growth cannot justify this exuberance.”

The country’s CSI 300 index of Shanghai- and Shenzhen-listed shares jumped 5.7 per cent on Monday to a five-year high. But this boom contrasted with a fall of 51 per cent in non-financial corporate earnings in the first quarter of the year, Mr Gatley said.

In the short-term, at least, such technical niceties may prove irrelevant. The events of 2015 and earlier rallies show that official cheerleading and loosening liquidity can combine to fuel advances based on little more than a fear of missing out.

Louis Kuijs, head of Asia economics at Oxford Economics, a research firm, said there was no doubt that liquidity conditions in China’s economy were loosening significantly. In May, China unleashed its strongest acceleration in credit since the end of May 2017 to support a broad economic recovery, according to Oxford Economics’ own measure.

“While Monday’s surge in share prices was dramatic, I am sure the generous liquidity situation and prospects for more easing measures are helping in providing a favourable setting for the stock market,” Mr Kuijs said.

Other measures confirm Mr Kuijs’s analysis of a liquidity-enhanced rally. The outstanding margin debt — incurred when investors borrow to buy stock — on China’s exchanges has risen to Rmb1.16tn ($164bn), the highest level since January 2016. Surging margin finance was also a hallmark of the early 2015 rally.

But keen to take a victory lap for becoming the first large economy to recover from Covid-19, China’s state-run media was seeking to bask in the stock market’s feel-good glow.

“Hahahahaha!” said a story in the Shanghai Securities News on Friday. “The signs of a bull market are more and more clear.”