One of the world’s great tourist destinations as well as home to some of South Africa’s worst slums, the picturesque city of Cape Town is now fast emerging as an African hotspot for Covid-19.

A surge of infections has placed South Africa on warning that its fight against the pandemic is only just beginning as the continent’s most industrialised economy slowly emerges from a strict lockdown.

An outbreak centred on the city in South Africa’s Western Cape accelerated last week to nearly 15,000 confirmed cases as of Sunday, against just over 8,000 a week before, about two-thirds of the country’s total and more than one in ten of all confirmed cases in Africa so far. It is a sign of how infections may yet pick up pace in a region that is still early to the pandemic, experts said.

The likely spread of the virus from international travellers to supermarkets in lockdown and workers living in the poorest townships of Cape Town “may be an early indication on how the epidemic will progress in other provinces over time,” Zweli Mkhize, the health minister, said last week. 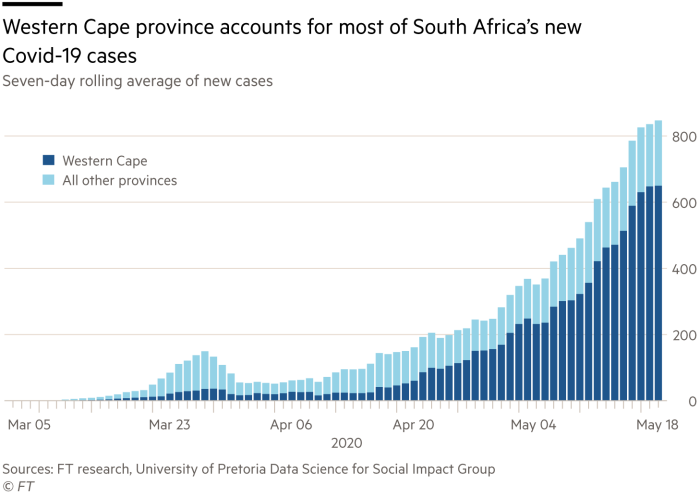 The surge also symbolises a dilemma for President Cyril Ramaphosa, who imposed a draconian lockdown in March that experts say averted an early uncontrolled rise and bought time for Africa’s biggest testing regime to kick in. There have been just over 400 deaths to date.

On Sunday Mr Ramaphosa announced a significant loosening of the national lockdown under a phased exit plan from the end of this month, amid pressure over mounting economic distress. The main opposition Democratic Alliance, which governs the Western Cape, has called to “end the national hard lockdown now”.

But Mr Ramaphosa also declared Cape Town and all other major South African cities as “coronavirus hotspots” requiring intense surveillance, as he warned that the worst of the epidemic is yet to come.

One-third of all South African cases to date have been recorded in the last week and “the risk of a massive increase in infection is now greater” than ever before, Mr Ramaphosa said.

“We are probably a little bit ahead of other parts of the country” and the surge in cases shows that South Africa’s strategy should instead shift from strict lockdowns to targeting local hotspots with intensive testing and quarantining, Alan Winde, the Western Cape’s provincial premier and a DA member, told the Financial Times.

The Western Cape outbreak is moving fast enough to put pressure on existing testing infrastructure. In South Africa as a whole the rate of positive results as a share of overall tests has been about 4 per cent. In the Western Cape, the rate so far has been double that as community spread has accelerated and the testing strategy has changed.

Mr Winde said the province was focusing tests on identified clusters, such as supermarket shift workers. “We should be testing more and more so we get to a 3 or 4 per cent rate” of positives in the province, he said.

There are bottlenecks at public laboratories and a global shortage of the chemicals needed for tests. The delays pose problems for frontline health workers in particular. “I’m not a happy camper at the moment,” he said. In a sign of the outbreak’s spread, Mr Winde spoke to the FT from self-quarantine after he came into contact with a journalist who died of the virus.

Activists said it will be hard for the poorest areas to follow suit. In Khayelitsha, Cape Town’s biggest township and the province’s second-largest hotspot after a main hospital, residents face the “harsh reality” of limited access to water, said Nkosikhona Swartbooi, a local activist. Without reliable internet or television many lack information about Covid-19, he said.

“People are still walking around, kids are playing soccer — that is not a result of people being naive or ignorant, they just don’t have access to information the way that others have . . . many people to this day do not know what social distancing means, especially in their mother tongue,” Mr Swaartbooi said.

Lockdown has been difficult to observe in crowded townships where houses may often be one-room shacks. The province “has been doing an amazing job” with community screening and the shift to targeting of hotspots is sound, Mr Swaartbooi said. But in a wider reopening, “what is the plan for informal settlements, what is the plan for townships?”

Mr Ramaphosa will soon face these questions across the country. According to modelling used by the government, about 40,000 South Africans could die by November, including about 10,000 in Gauteng, the most populous region.

The projections “should be interpreted with caution” as they hinge on how South African society will reopen and on more understanding of how localised clusters drive cases, modellers said.

Mr Ramaphosa’s government will have to juggle resources for different regional peaks, they suggest, with Western Cape cases expected to crest in June or July.

Already, the neighbouring and poorer Eastern Cape is recording local surges, partly tied to farmworkers returning from the west. The Western Cape government has said it has prepared its health system for the peak, but that it will still lack enough intensive-care beds. Cape Town’s international convention centre, which in February hosted the world’s biggest mining conference, is being turned into a field hospital.

Despite political infighting, provinces are trying to share lessons before they confront similar surges, Mr Winde said. “We are all in some brand-new thing together . . . that is the way this virus works,” he said. “It creeps up on you.”