Not long after Goldman Sachs and Deutsche Bank backed one of Europe’s biggest ever private equity buyouts, they had cause to regret it.

In late February, the banks and four other lenders agreed to underwrite the debt supporting Advent International and Cinven’s €17bn acquisition of Thyssenkrupp’s elevator business.

By the end of the following month, after the spread of Covid-19 caused convulsions in the market for riskier corporate debt, the lenders were already having to provision for losses. They faced the prospect of sitting on €8bn of bridge loans tied to the deal for an uncomfortably long period, unable to shift the risk to fund managers.

But now, such is the strength of the snapback in demand for junk bonds and leveraged loans, the banks are aiming to launch the mega-deal as early as the end of this month, according to people familiar with the plans.

The bridge loan to the German lift maker is the largest among tens of billions of dollars of assets piled up on banks’ balance sheets on both sides of the Atlantic. That mountain includes debt backing buyouts of businesses severely hit by the crisis, such as Las Vegas casinos, a UK pub chain and a northern Italian maker of luxury sneakers.

However, improving markets mean that banks have now started working through that backlog far quicker than they had thought possible. A slew of US acquisition debt deals were completed in recent weeks and Europe this week saw its first private equity buyout loan to close in months.

“The tone has definitely changed in the market,” said Stan Hartman, head of Emea high yield and leveraged loan syndicate at BNP Paribas. 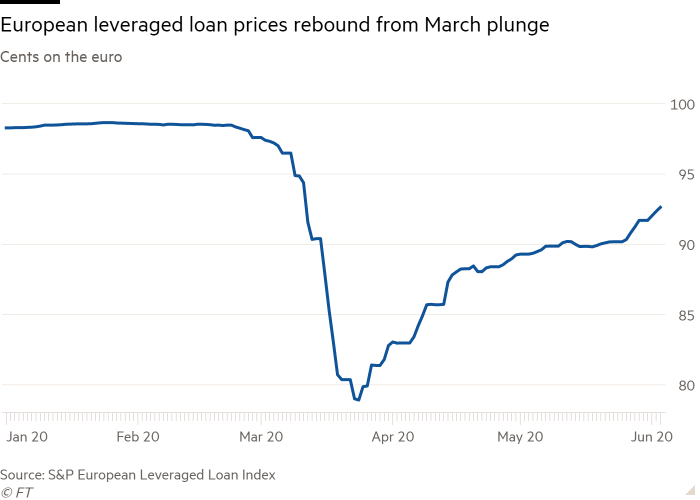 In a typical leveraged buyout (LBO), banks agree to hold the debt for a period and then profit by selling it to investors in the form of junk bonds or leveraged loans, which carry lower-quality credit ratings.

But if markets collapse, the banks can find themselves stuck with that bridge financing in what is known as a “hung deal”. They can then take losses on the debt if they are forced to offer it to wary investors at big discounts to face value.

In the US, banks have taken hits in trying to shift some of their stuck buyout loans. On Monday, Bank of America, RBC and Barclays sold $1bn of loans backing technology company Xperi’s acquisition of digital video recording business TiVo at 90.5 cents on the dollar, according to people familiar with the matter.

“All of these [deals] are going to have to come with pretty deep discounts,” said John Gregory, head of leveraged finance capital markets at Wells Fargo Securities.

In Europe on Wednesday, banks led by JPMorgan and Nomura cleared the €725m of loans backing the private equity buyout of French insurance broker Financière CEP at a healthier price of 97 cents.

Other European deals could be more painful. Banks led by Credit Suisse are indicating that they could sell on nearly €1bn of acquisition-related debt backing equipment rental business Boels for as little as 92 cents on the dollar. They have also taken the decision to hold around €625m of the family-owned business’s debt on their balance sheets, having tried — and failed — to sell the full €1.6bn in February as markets started to turn.

The big question now is whether Goldman and co will be able to get out of the Thyssenkrupp elevators deal unscathed.

The business has strong recurring revenues, which normally comfort debt investors. But the sheer scale of the financing is challenging. The bulk of the €8bn deal is earmarked for the leveraged loan market, which has been slower to recover than its high-yield bond equivalent.

Bankers on the deal said the businesses’ new private equity owners should offer them flexibility to shift some of these loans into secured bonds if they need to. The lenders have also already placed more than a third of the deal’s €1.7bn of riskier unsecured bonds, according to three people familiar with the matter. That reduces the amount of debt they have to clear when they eventually launch the deal.

Private equity firms are keeping a close eye on these efforts, as they consider whether to write new cheques to buy businesses.

“We’re watching quite closely — both buyers and sellers are,” said Christian Sinding, chief executive of EQT, the Swedish private equity firm. He added that if banks regain confidence in their ability to place higher-risk debt then firms like his can “do more . . . and larger deals”.

Andrey Kuznetsov, senior credit portfolio manager at Hermes Investment Management, said that while the market backdrop has “become more conducive” to leveraged buyouts, deals with credit ratings in the lowest reaches of junk would remain “challenging”.

“We are on a healing path for LBO financing,” he said. “But we haven’t healed yet.”