Foreign investors in Brazil’s stock and bond markets continue to withdraw money en masse from Latin America’s largest economy, frightened off by hard-right president Jair Bolsonaro even as investment returns to many other emerging markets.

Cross-border flows from Brazil have dwarfed those of most other emerging economies. Foreign investors took $11.8bn from Brazil’s stock market in the four months from February to May and $18.7bn from its bond market between February and April, the most recent month of available data, according to the Institute of International Finance, an industry association that gathers emerging market data.

The record outflows, said Monica de Bolle, a senior fellow at the Peterson Institute for International Economics in Washington, “reflect investors’ fears regarding the evolution of the pandemic but, most importantly, the fear of Bolsonaro as an agent of economic, political, institutional and health crises himself”.

Foreign investors have always been wary of Mr Bolsonaro’s promises of fiscal discipline, and money trickled out of the Brazilian stock market last year. But since March, foreign money has flooded out of Brazilian assets, according to the IIF.

At the same time, emerging markets as a whole have seen a partial reversal of the almost $83bn of outflows they saw that month, with nearly $23bn returning in April and May as investors look for bigger returns than those available in developed economies.

In Brazil, Mr Bolsonaro is at the centre of a political crisis that has put his grip on power in question, but he continues to shrug off the seriousness of coronavirus even as Brazil has seen more than 500,000 infections and an estimated 30,000 deaths so far. 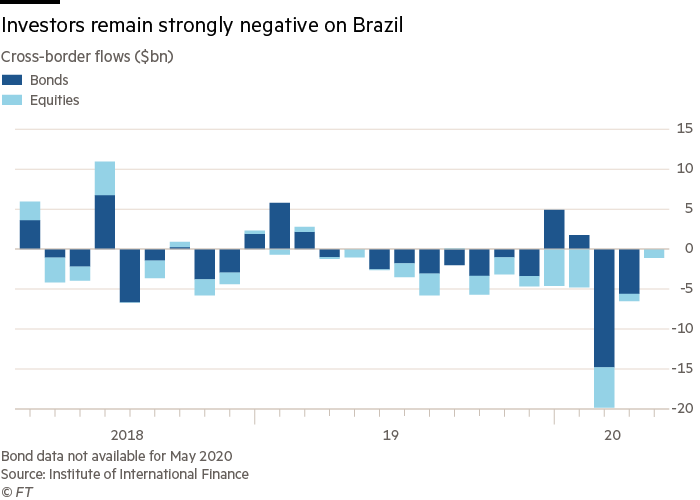 Business and consumer confidence have been shaken, putting the country’s already rocky public finances under further pressure. The central bank’s latest weekly poll of market economists predicts that the economy will contract nearly 7 per cent this year.

Health officials expect the first wave of the disease to peak in Brazil between July and September, meaning the cost of an emergency support package assembled to fight the economic hardship of the pandemic will rise. Alberto Ramos, Latin American economist at Goldman Sachs, expects this to result in a fiscal deficit equal to 19 per cent of gross domestic product this year.

This has forced Paulo Guedes, the economy minister, to shelve his reformist agenda, unnerving investors. Brazil used to be a favourite investment destination because it promised high rates of economic growth and was on a path of fiscal reform. Its high interest rates offered rich returns from the “carry trade” — borrowing money where interest rates are low, such as in the US and Europe, to invest in local bonds where rates are high.

However, even before the pandemic, growth stalled and interest rates were slashed. The central bank cut its policy rate to 3 per cent this month, less than annual inflation and down from 14 per cent in late 2016.

Now, said Paul Greer, emerging market fixed income portfolio manager at Fidelity International in London, “the macro is ugly, there’s no growth and no carry, the fiscal situation is getting worse and on top of that is Covid-19 and messy politics”.

Investors have been unnerved by the firing of two health ministers and the resignation of Sérgio Moro, the popular justice minister, amid allegations that Mr Bolsonaro attempted to interfere with federal police inquiries. The country now faces the possibility of either an ugly and drawn-out impeachment process or a constitutional crisis as the president ramps up a campaign of attacks on the Supreme Court.

“Investors always felt that Bolsonaro was happy to outsource decision making, with Guedes in the economy ministry and Moro at the justice ministry,” Mr Greer said. “But now it looks as though he is trying to take hold of executive power, which is something the market really doesn’t want.”

The result, said Robin Brooks, chief economist at the IIF, is that cross-border outflows from Brazil’s stock and bond markets have been “off the charts”, running at double their rate following the onset of the global financial crisis in September 2008.

This is despite the fact that Brazil was one of the few emerging economies to be granted a currency swap facility by the US Federal Reserve as the pandemic struck, giving it ready access to dollar funding. The Fed has injected trillions of dollars into global financial markets, allowing several other emerging economies to issue new external bonds to help fund their response to the crisis.

Mr Brooks blamed Brazil’s politics for scaring investors away — as well as its economic policymaking during the crisis, particularly the central bank’s plan to buy government bonds in a programme based on the Fed’s quantitative easing.

“People are pretty sceptical that policy experiments in the US should be tried out in Brazil,” he said.

Nevertheless, Tony Volpon, chief economist at UBS in São Paulo, pointed out that while foreign investors have pulled masses of money out of stock and bond markets, Brazilian investors have poured roughly the same amount in, as they search for higher yielding assets now that real interest rates have fallen into negative territory.