The Chicago-based company will “further assess” the size of its workforce, Mr Calhoun said. It announced plans three months ago to reduce its headcount of 160,000 by 10 per cent. So far it has moved to cut 12,000 jobs through a mix of lay-offs and buyouts.

“The reality is the pandemic’s impact on the aviation sector continues to be severe,” he said in a memo to employees. “Though some flyers are returning slowly to the air, their numbers remain far lower than 2019, with airline revenues likewise reduced.”

Boeing had anticipated a slow ramp-up for the Max, which has been grounded for 17 months following two fatal crashes. Now it will be even slower. Instead of workers building 31 planes a month by the end of 2021, the company said it would not reach that rate until 2022.

The company’s timeline to resume deliveries of the troubled Max also has slipped again. Boeing said it expected to start relaying the jet to customers during the fourth quarter, instead of the third. At the start of the year, Mr Calhoun said the grounding would probably lift by midsummer.

Once the Federal Aviation Administration lifts the grounding, airlines will take another two to three months for testing and pilot training — which now requires time in simulators — before adding it back into their schedules.

Southwest Airlines said last week it hoped to start flying passengers on the Max in December, but it could slip to next year.

The manufacturer also cut rates again for wide-body jets. They were losing popularity with airlines even before the pandemic, and the trend has accelerated since passenger traffic on the international routes they service is expected to recover the slowest of all.

Boeing, which had previously aimed to make seven 787 Dreamliners a month by 2022, said it would not reach that goal. It would instead make six per month in 2021, or down from 10 a month at present. Mr Calhoun also floated the idea of consolidating its production in a single factory. Presently, the jet is built at plants in Everett, Washington, which is unionised, and South Carolina, which is not.

The anticipated 777X rate fell to two per month in 2021 from three previously.

Boeing posted a net loss of $2.4bn in the second quarter, compared with a $2.9bn net loss for the same period a year ago. Revenue declined 25 per cent to $11.8bn, with the steepest drop, 65 per cent, logged in the commercial jet division.

Boeing delivered 20 commercial jets in the second quarter of 2020, compared with 90 for the same period last year. 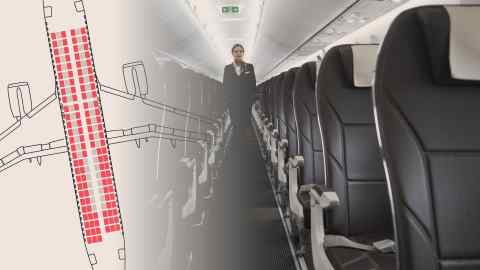 The services business also took a hit, with revenue declining 23 per cent to $3.5bn as airlines pulled back on items such as maintenance and supply chain services.

The reduction in deliveries and services led to free cash outflow of $5.6bn, compared with $1bn in the second quarter of 2019.

“A lot has been baked into the Boeing stock, as bottom-line miss was not unexpected and significant [free cash flow] usage has been the consensus for many months,” he said. “But [Wall} Street estimates will still likely move lower for 2021 and 2022 as production rates changes are revised.”