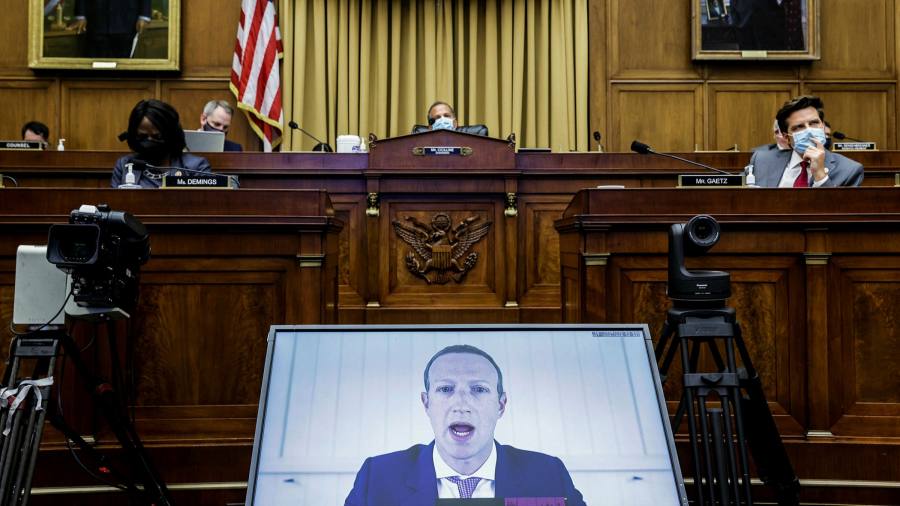 First, the indictment. Big Tech’s leaders faced members of the US Congress this week and failed to present a convincing case that they have not been led by self interest to tilt the digital playing field in their own favour.

Jeff Bezos, in his first appearance at a congressional hearing, was caught off guard. He admitted he didn’t know if Amazon’s employees were misusing the data of independent merchants who are meant to be partners. He declared it “unacceptable” that some people at his company might have deliberately promoted counterfeit goods to generate advertising sales. And he seemed genuinely puzzled that Amazon had delisted a small independent bookseller without explanation.

For anyone whose livelihood depends on Amazon’s powerful online platform, it didn’t inspire confidence that they would always get a fair deal.

Mr Bezos’ peers at Apple, Alphabet and Facebook, with more experience of political hearings, were better able to parry the criticisms from the House antitrust subcommittee and fall back on platitudes. But they still came across as prevaricating and defensive in the face of an attack by Democratic representatives that was, against the odds, surprisingly effective. Taking on a handful of powerful companies over a range of complex issues, particularly with the distraction of a Republican minority more interested in using the hearing to score political points, was never going to be easy.

But if the event helped to shine a light on some of the ways the most powerful tech platforms have cemented their position, and how they have become a more hostile place for some of the independent developers, merchants and publishers who depend on them, it did not highlight many obvious abuses open to immediate action. The most palpable hit came against Facebook: Internal communications revealed how Mark Zuckerberg sees acquisitions as an effective way to neutralise potential competitors, and how start-ups fear that if they reject a Facebook buyout he will go into “destroy mode” against them.

Other internal documents unearthed by the committee showed executives at the leading tech companies grappling with how to use their formidable platforms to buttress their positions in fast-changing tech markets. Google insiders worried about how to fend off competition on the way to erecting what Democratic critics called a “walled garden”. As one executive opined: “The open web we knew & loved is going away.” But if this was the most damning evidence the politicians could dig out of the 1.3m internal documents they amassed, Big Tech probably doesn’t have too much to fear.

This leaves the Techlash pretty much where it was before this week’s hearing: with growing political and regulatory pressure for action, but a shaky legal foundation on which to seriously challenge Big Tech’s dominance and an uncertain political outlook.

The regulatory challenge is certainly building. The UK’s Competition and Markets Authority might have ducked the issue earlier this month by not recommending a full investigation of digital advertising, but others are making their cases.

The European Commission seems ready to resist Google’s acquisition of Fitbit without strict ringfencing of users’ health data. Australia’s consumer and competition regulator has just sued the search company for misleading users over how it combines data for ad targeting. It also suggested that the company’s control of many parts of the adtech value chain put it in an unfair position — an issue that US states are also looking into.

How much appetite Brussels will have for a fresh offensive against Big Tech is another question. The successful appeal against the huge fine levied over Apple’s tax position in Ireland has dented the reputation of digital commissioner Margrethe Vestager and left a question over her aggressive tactics.

The US Department of Justice, by contrast, is seemingly ready to plough ahead with a complaint against Google, in what would be its most significant tech case since challenging Microsoft more than two decades ago. Bill Barr’s justice department has antagonised Democrats with its backing for some of President Trump’s more controversial policies, but this could be one issue that brings the two sides together.

For Mr Barr, a case against Google would be a good way to show off the potency of the current antitrust laws, and underline the conservative argument that there is no need to enact tougher legislation against big business. And with a presidential election looming in which the Democratic candidate has emerged a clear favourite in the polls, the potential damage from mounting a risky case has diminished.

Democrats, meanwhile, can take heart from this week’s hearing if they hope to clip Big Tech’s wings. But a Biden White House would face far more pressing issues, starting with a combined health and economic crisis of historic magnitude. There’s also the growing urgency among voters to take on profound issues of social and racial justice — not to mention climate change.

For the billions of people who post or search on their sites, buy their phones, and shop in their online malls, Big Tech is still hugely popular. It is an open question how much political will there will be to put serious restraints on the industry.