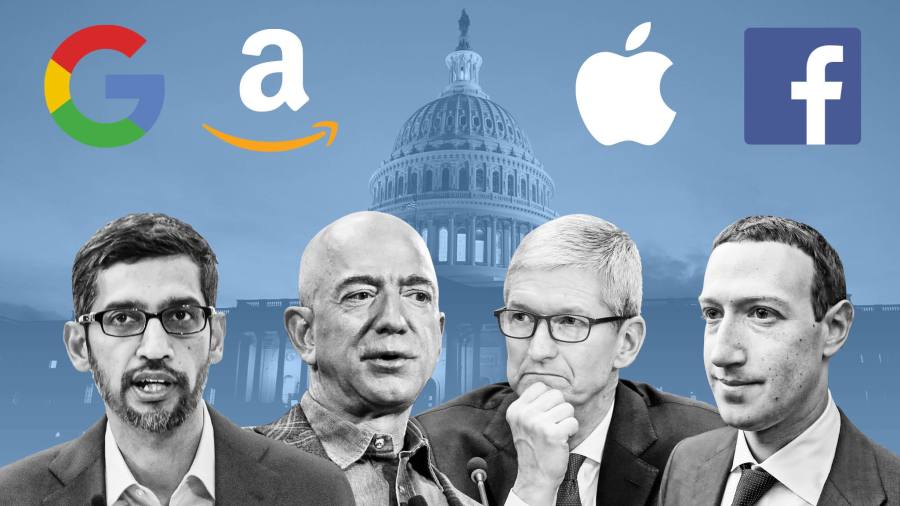 This summer’s box office event will be in Washington on Wednesday as the heads of Amazon, Apple, Alphabet and Facebook appear together before Congress for the first time.

The grilling is the culmination of 13 months of investigation by lawmakers into the market power of Big Tech, during which 1.3m documents were turned over, some of which may be made public.

The list of complaints is long and varied, but the criticism directed against all four companies, who together have a market value of almost $5tn, is that they have used their lock on consumers to choke off smaller rivals’ ability to compete.

Jeff Bezos, Tim Cook, Sundar Pichai and Mark Zuckerberg will testify over video link, avoiding the usual courtroom-like setting, but all four will sit for questions at the same time.

The investigation will produce a report after the hearing, which should be published before the end of the year and could form the basis of new laws to regulate Big Tech.

“The public has the right to understand how these corporations are using, or abusing, their power, as well as the right to take action to fix this problem,” said one Democratic aide.

The probe has been conducted in parallel with federal investigations, with the justice department scrutinising Alphabet, the parent company of Google, and the Federal Trade Commission looking at Facebook. Both companies are also the target of investigations by several state attorneys-general.

Democratic committee aides said they wanted the congressional hearing to be “laser-focused” on antitrust issues, but the bosses are also likely to face several other political banana skins, including how they police speech online, their behaviour during the coronavirus crisis, and how they approaching November’s presidential election.

Here are the main issues facing the four companies.

Jeff Bezos, who is testifying in front of Congress for the first time, and Tim Cook will both face the same line of questioning: Are they abusing the enormous power they have as gatekeepers of their marketplaces?

In Amazon’s case, there have been a number of accusations that the company uses data it gathers from its platforms about successful products and then uses that information to develop its own competing products, such as the Amazon Basics line.

Other issues may include whether Amazon encourages companies to use its own delivery services for their goods, rather than FedEx or the US Post Office, by promoting products fulfilled by Amazon higher up its search rankings.

Apple is also fighting accusations, particularly in Europe, that it is abusing its position as a gatekeeper. App developers have complained that they are charged a slice of their sales to access iPhone users through Apple’s app store, but then find themselves in competition with Apple’s own apps.

Only Apple can approve apps for distribution, and Apple is the sole referee in any appeal. It is unclear how apps in the store are ranked, and some of Apple’s pre-installed apps cannot be deleted from phones. Apple has also frequently produced its own versions of successful independent apps.

“We call this ‘a thousand different cuts’ — it’s not that there’s a single tactic that Apple uses, there are 1,000 different things Apple does to control the user experience,” said Dan Volach, co-founder of Blix, a software developer that sued Apple last year alleging patent infringement and unlawful monopolisation.

As well as competition issues, expect Mr Bezos to be asked about how many of its employees have fallen sick in its warehouses to coronavirus, while Mr Cook is likely to face questions about why Apple continues to restrict content and software in China, and now possibly Hong Kong.

Facebook and Alphabet both face accusations that they have grown utterly dominant in social media and online search by squeezing out, or buying, rivals.

After the purchases of WhatsApp and Instagram, Mark Zuckerberg’s only real competition in social media comes from China, where the banning of his apps and websites have created space for local tech giants to emerge.

Mr Zuckerberg is likely to respond that regulators cleared the two acquisitions at the time, and that competition exists in the form of YouTube and Snap. He may even argue that curbing Facebook’s power now would gift an advantage to fast-growing Chinese rivals, such as TikTok.

There is no shortage of issues for Congress to dig into when it comes to Alphabet. During the investigation, it has heard from companies as varied as Sonos, the speaker maker, that claims the search company stole its intellectual property, and Basecamp, the software maker that accused Google of being a “protection racket” that forces other businesses to pay a high price to reach its customers.

High up on the list of issues in the federal and states investigations has been Google’s dominance of online advertising, and whether it unfairly steers business to its own advertising marketplaces.

But if there is one thing that has united many of the company’s critics, it is the way that Google’s search engine results put the company’s own services, like YouTube, front and centre.

Meanwhile, expect both Facebook and Alphabet to be attacked by Republicans for being politically biased against them, and by Democrats for not doing enough to curb hate speech.