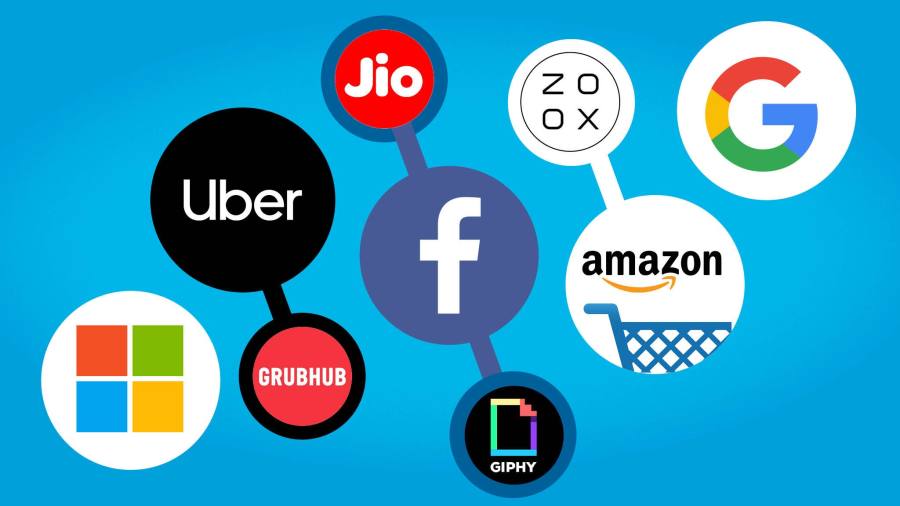 Big technology companies are hunting for deals at their fastest pace in years, racking up acquisitions and strategic investments despite increased regulatory scrutiny during the coronavirus-led market turmoil.

Alphabet, Amazon, Apple, Facebook and Microsoft have announced 19 deals this year, according to Refinitiv data from May 26, representing the fastest pace of acquisitions to this date since 2015.

The Financial Times on Tuesday reported Amazon was also in advanced talks to purchase the self-driving car company Zoox, which was valued at $3.2bn two years ago. Meanwhile, Facebook in March announced its largest international investment yet, purchasing a $5.7bn stake in the juggernaut Indian telecoms operator Reliance Jio.

The deals mark a departure from the 2001 recession and the 2008 financial crisis, when tech companies largely retreated from big purchases following dips in the stock market.

“One big difference between now and the last financial crisis is the cash balances of the tech majors are in the hundreds of billions, all effectively onshore, due to the Trump tax changes,” said John Gnuse, a tech M&A adviser at Lazard, referring to president Donald Trump’s move to lower the rate on repatriated offshore profits.

The dealmaking streak also represents a further consolidation of Big Tech’s power in the middle of the Covid-19 crisis, as the groups look to capitalise on their record valuations and resurface as the dominant players in emerging sectors.

Antitrust advocates have warned that such opportunistic deals — some of which involve bargain purchases of start-ups whose business models were affected by the crisis — risk widening the gap between the largest players and their smaller competitors.

“This crisis threatens to further entrench the power of Big Tech,” said Sandeep Vaheesan, legal director at the Open Markets Institute, a think-tank that studies corporate concentration. “These companies are already extraordinarily powerful, but they’re well positioned to emerge as the biggest winners of Covid-19 unless some legislative action is taken.”

Analysts have been waiting for an increase in tech mergers and acquisitions spurred by the swelling coffers at the five Big Tech companies, which together held more than $560bn in cash and marketable securities at the end of the first quarter, according to public filings.

Atif Azher, a partner at the law firm Simpson Thacher, said many tech executives were not waiting for the end of the pandemic to return to doing deals, and were getting increasingly comfortable with making strategic acquisitions in the current climate.

“People are starting to realise that this may be the new normal for some period of time . . . They’re trying to find a way to proceed, and for some industries there seem to be some attractive opportunities,” said Mr Azher.

Besides Facebook’s Jio purchase, big tech companies have mostly looked to acquire smaller start-ups in areas ranging from gaming to cloud computing — deals that are expected to benefit from current lockdown measures as well as potentially longer-term shifts in behaviour such as remote working.

Earlier this month, Facebook paid about $400m to acquire Giphy, which hosts a search engine for animated images known as GIFs, with a view to integrating the company’s image library into Instagram and other apps.

Giphy had generated about $19m in annual revenues before the acquisition, meaning Facebook paid more than 20 times that amount for it, according to people briefed on the matter. Facebook and Giphy declined to comment on financial details.

Meanwhile, tech companies are also evaluating deals that could reshape emerging sectors such as food delivery and mobility technology.

Amazon’s discussions with Zoox followed news that Uber was seeking to acquire Grubhub in a deal that would create the largest player in the US meal delivery market. Earlier this month, Uber paid $85m for a 16 per cent stake in the struggling scooter rental service Lime, in a deal that gives the car-booking group the option to buy the company in two years.

Big Tech’s dealmaking push comes in spite of growing concerns in Washington about its monopolistic power. The Federal Trade Commission has begun a review of small acquisitions made by the five tech giants dating back to 2010, while the Democrats Alexandria Ocasio-Cortez and Elizabeth Warren have proposed a ban on “predatory” crisis-era purchases by companies with more than $100m in revenues.

However, antitrust advocates have expressed scepticism that the Department of Justice and regulators can rein in spending by big tech companies, instead seeking to marshal popular opinion through measures such as the pandemic bill proposed by Ms Ocasio-Cortez and Ms Warren.

“At a fundamental level, the DoJ and FTC can’t be trusted to prevent concentration writ large,” Mr Vaheesan said. “They no longer view that as their mission.”

M&A advisers said large tech companies could still look to consolidate industries such as cloud computing. Oracle, whose cloud offering has lagged behind peers, raised $20bn from a debt offering in March, which it said would be put towards future acquisitions and other general corporate purposes.

“Some of the clear beneficiaries have seen dramatic market [capitalisation] creation over the last several months and are inclined to take advantage of that,” said Sam Britton, head of technology, media and telecoms M&A at Goldman Sachs.

“Acquirers see no real reason to rush into doing big deals,” Mr Boutros said. “Those big transformational deals require senior executive confidence and visibility in the outlook, and given the recent rapid recovery in the technology markets, most of them are not cheap.”