The chief executives of four American tech giants are set to face accusations of wielding their companies’ size to unfairly squash competition, as they face a grilling from lawmakers on Capitol Hill.

Amazon’s Jeff Bezos, Facebook’s Mark Zuckerberg, Apple’s Tim Cook and Sundar Pichai of Google’s parent company Alphabet, however, are set to tout their companies — which have a combined market value of $5tn — as “uniquely American” success stories, directly creating more than 1m jobs in the country and enabling the prosperity of small and medium-sized businesses.

With a video link to the House judiciary committee’s antitrust subcommittee, Wednesday’s event is the first time all four chief executives have been involved in the same hearing. For Mr Bezos, it is the first time he has personally addressed Congress, some 26 years after founding his company.

“To fulfil our promises to customers in this country, we need American workers to get products to American customers,” he will tell lawmakers, according to prepared testimony.

The subcommittee, lead by Democrat congressman David Cicilline, has for the past year been investigating an assortment of complaints about “Big Tech”, alongside similar probes from other agencies, including the US Department of Justice and the Federal Trade Commission, as well as the European Commission.

“The public has the right to understand how these corporations are using, or abusing, their power, as well as the right to take action to fix this problem,” said one Democratic aide prior to the hearing.

The committee does not have the power to take any action against the companies. But it will seek to use its final report, due later this year, to inform possible changes to antitrust laws. 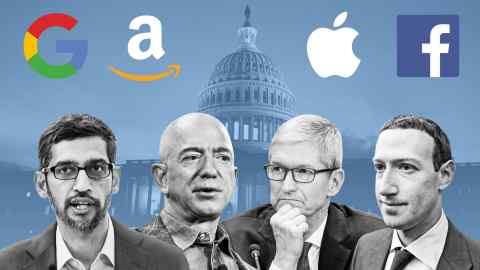 While concern over the power of Big Tech is considered a bipartisan issue, the two US political parties are at odds on the nature of the threat. Republicans at Wednesday’s hearing are expected to use the opportunity to rail against what they claim to be an anti-conservative bias on the platforms.

Free speech arguments aside, the accusations across all of the investigations are broadly the same. Amazon, as the dominant ecommerce retailer, and Apple, as custodian of its highly lucrative App Store, are said to be onerous gatekeepers of their platforms — charging fees while favouring their own products in their respective marketplaces, utilising insights from data not available to outsiders.

Facebook and Google’s parent Alphabet are said to be using their dominant positions in social media and search to buy up smaller rivals in order to cement their position, as well as using the enormous reach of those networks to push consumers towards their own products, such as shopping services.

Facebook’s Mr Zuckerberg will argue that limiting the actions of US tech giants would open the door to Chinese competitors.

“Many other tech companies share these values, but there’s no guarantee our values will win out,” Mr Zuckerberg will say. “For example, China is building its own version of the internet focused on very different ideas, and they are exporting their vision to other countries.”