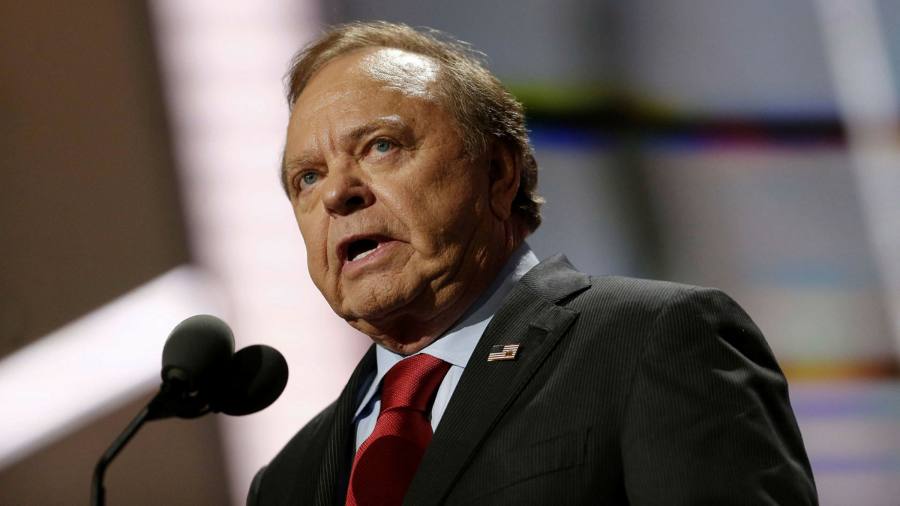 Harold Hamm, the billionaire shale pioneer, said Joe Biden’s clean energy plan was “not based in reality” and warned Saudi Arabia never to repeat its price war on the US oil sector, as he hit out at those he sees as opponents of American oil.

Mr Hamm, executive chairman of Continental Resources, a leader of the shale revolution that made the US the world’s biggest oil producer, praised President Donald Trump for helping raise crude prices in recent weeks, and dismissed his Democratic challenger’s energy proposals.

“It’s not sound economics,” said Mr Hamm in an interview, referring to the green energy deal guiding Mr Biden’s energy policy. “It’s not reasonable. It’s not based in reality. People should be concerned when they hear things like that.” Mr Biden’s campaign team did not respond to requests for comment.

Mr Hamm has advised the White House on energy and still talks frequently with Mr Trump. He attended the president’s rally in Tulsa, Oklahoma, on June 20.

The stark differences in the candidates’ platforms mean November’s presidential election will be pivotal for US energy. Among proposals from Mr Biden, who leads the polls, are a commitment to net zero emissions by 2050, rejoining the Paris climate agreement, clamping down on oil-industry methane leaks, and huge spending on clean energy. Mr Biden describes the Green New Deal espoused by Alexandria Ocasio-Cortez and other Democrats as a “crucial framework” for his plan.

Look at the tremendous amount of subsidies that have gone into the wind and solar industry,” said Mr Hamm. “We don’t get subsidies

Fossil fuels remain the cornerstone of Mr Trump’s energy policy. He has rolled back rules hindering oil and gas development, wants to open up more federal land for drilling, and has proclaimed an era of “American energy dominance” characterised by sanctions on foreign oil and gas producers and promotion of US energy exports.

Mr Hamm’s influence on the Oval Office would be replaced with that of Jay Inslee, the Washington state governor and clean energy advocate, Mr McNally added.

The administration “realised energy independence does great things for America”, Mr Hamm said. “We’re not at the bidding of what we’ll call rogue regimes.”

US crude production has more than doubled since 2008, as companies such as Mr Hamm’s Continental have drilled shale oil deposits from North Dakota to Texas and beyond.

Although production boomed during the Obama years, executives and investors in the shale patch think another Democratic government would imperil the sector by favouring green energy at oil’s expense.

“Look at the tremendous amount of subsidies that have gone into the wind and solar industry,” said Mr Hamm. “We don’t get subsidies.”

Analysts say US oil and gas producers receive considerable support from federal and state governments, including tax breaks, while credits for US wind and solar developers are being phased out.

US political support has meanwhile been a lifeline for the shale sector after Saudi Arabia crashed crude markets in March, prompting Mr Trump to plead with Riyadh to cut supply and end its price war.

Mr Hamm spoke frequently with the president at the height of the negotiations with Riyadh, and attended a White House meeting with oil executives on April 3. Mr Trump pledged to protect their businesses, including offering to make bailout funds available.

Despite a record Opec cuts deal agreed under US pressure on April 12, oil prices crashed to below zero later that month amid fears of a glut, forcing US operators to shut producing wells.

Production is now 15 per cent below its record high earlier this year, according to the federal Energy Information Administration. Some consultants believe it is much lower, less than 10m b/d — a level not seen since 2017.

The easing of Covid-19 lockdowns has helped oil prices rally in recent weeks. But at about $38 a barrel on Friday, West Texas Intermediate is still more than 40 per cent beneath its high this year.

Although Continental and others are now reopening the wells they shut, Mr Hamm said a price “north of $40” would be needed to “recapitalise” the shale sector and prompt significant new drilling.

Still, Mr Hamm’s optimism remains intact. Last week he spent $57m increasing to almost 80 per cent his stake in the company he founded in 1967.

He was also instrumental in garnering industry support for a new oil contract for the US Gulf coast. Price-reporting agencies S&P Global Platts and Argus both launched rival contracts on Friday, the latest attempt to create an American benchmark reflecting international seaborne prices, not those at landlocked Cushing, Oklahoma, the delivery point for Nymex’s WTI futures contract.

The new contract would let US oil compete in the “same market situation” as Saudi Arabia and other rivals, said Mr Hamm.