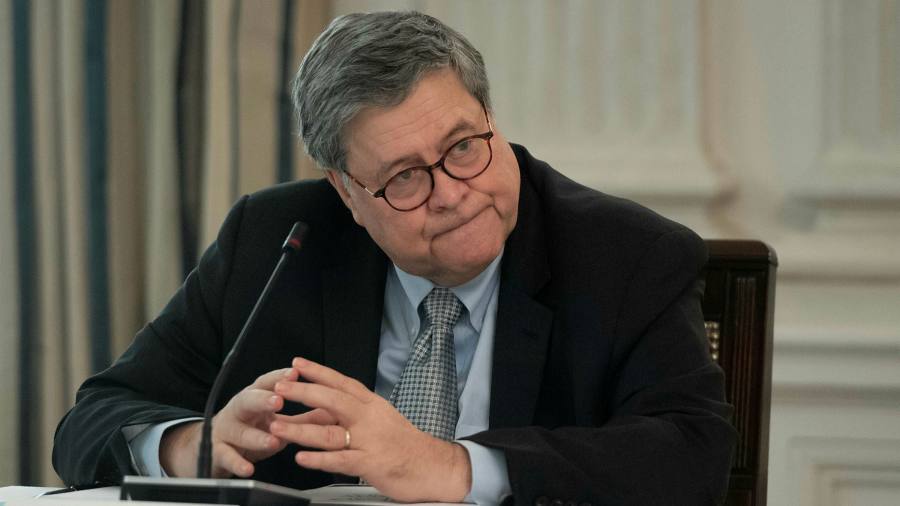 William Barr, the US attorney-general, chided corporate America on Thursday for its “appeasement” of the Chinese Communist party and warned that US business leaders advocating for Beijing could fall foul of foreign lobbying laws.

Mr Barr said Chinese government officials had increasingly sought to pressure American executives into taking action to support their international policy priorities and cautioned that doing so could require them to register as foreign agents.

“You should be alert to how you might be used, and how your efforts on behalf of a foreign company or government could implicate the Foreign Agents Registration Act,” he said, referencing a 1938 law that requires foreign agents to publicly identify themselves.

The comments come at a time when President Donald Trump has increased pressure on Beijing, including signing legislation this week that clears the way for imposing sanctions on Chinese officials over their moves to strip Hong Kong of its semi-autonomous political system.

Campaign aides believe Mr Trump can regain lost ground against Democratic rival Joe Biden by casting himself as tough on China, part of an effort to draw a contrast on the subject with the policies of the Obama administration, where Mr Biden served as vice-president.

Mr Barr took particular aim at large US technology companies and Hollywood, insisting that business leaders who pander to Beijing’s demands would only reap short-term rewards.

“The ultimate ambition of China’s rulers isn’t to trade with the United States. It is to raid the United States,” Mr Barr said at the Gerald R Ford Presidential Museum in Michigan. “If you are an American business leader, appeasing the [People’s Republic of China] may bring short-term rewards. But in the end, the PRC’s goal is to replace you.”

He accused Google, Microsoft, Yahoo and Apple of having “shown themselves all too willing to collaborate” with the Chinese Communist party and of having “allowed themselves to become pawns of Chinese influence”.

The attorney-general denounced what he described as self-censorship in Hollywood, where studios eliminate content that might offend Beijing in order to win distribution rights in China.

The aggressive rhetoric built on what has been a steady drumbeat of warnings and prosecutions relating to China from the Department of Justice in recent years. Prosecutors have brought a steady stream of cases targeting alleged Chinese influence efforts and technology theft as part of a “China Initiative” launched in 2018.