BHP, Rio Tinto and Fortescue Metals Group said innovative technology, an adaptive workforce and government policy have allowed them to avoid the crises elsewhere that have hampered competitors and helped propel prices above $100 a tonne.

With the iron ore sector in other big exporting nations such as Brazil and South Africa badly disrupted, the Australian companies are shipping record volumes to China, where demand has remained buoyant and is tipped to grow as the nation’s lockdown eases and its economy rebounds.

The trio, which already control almost two-thirds of seaborne trade in the commodity, have enjoyed rising share prices since Australia launched its response to the pandemic in early March. FMG hit a record high on Monday, taking its market capitalisation to A$45bn ($30bn).

“Fortescue, together with our industry peers, continues to be in a privileged position to continue to operate throughout this time of unprecedented disruption,” said Elizabeth Gaines, chief executive. “We are also seeing market concerns on the security of supply from other iron ore producing countries.” 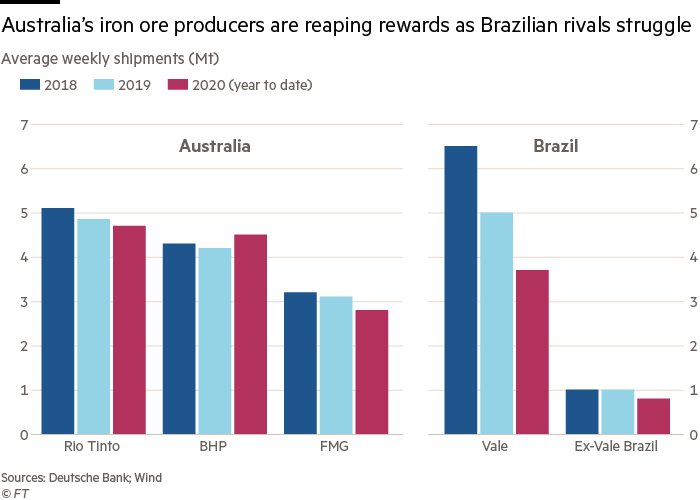 Brazil’s iron ore exports to China have slumped 12 per cent so far this year while South Africa’s have dropped 9 per cent, according to UBS research.

But steel production in China has been steadily increasing since Beijing began in late March to loosen nationwide restrictions put in place to contain the virus.

The Australian groups are moving to fill the iron ore supply gap, brushing aside rising Sino-Australia trade tensions. In the first four months of 2020 they exported 278m tonnes, up 11 per cent on the same period a year ago, according to Deutsche Bank.

Australian mining groups’ ability to continue business as usual as the country implements sweeping measures to cope with the public health crisis is enhancing Australia’s reputation as the most stable and reliable supplier of critical minerals, industry observers say.

“Despite Covid-19, Australia’s iron ore producers are faring extremely well,” said Glyn Lawcock, an analyst at UBS. BHP, Rio and FMG are expected to increase shipments by 2 per cent this year, and would generate free cash flow in excess of $25bn if iron ore prices average $100 a tonne for the whole year, he said.

About 60 per cent of Rio’s workforce in the Pilbara region travel from Perth or other regional centres, a huge logistical exercise made tougher by social distancing rules © Reuters

Canberra took swift action to close international borders and implement social distancing when the virus struck. But it also designated mining an essential industry, enabling employees to continue travelling to work in the Pilbara — the iron ore heartland in Western Australia that relies on “fly-in, fly-out” workers.

“In Australia they went pretty hard,” Rio Tinto chief executive Jean-Sébastien Jacques told the Financial Times. “They have put a good quarantine system in place and shut down the internal borders as well. That is making a big, big difference.”

Rio, which overtook Vale as the world’s biggest iron ore producer in December, is on course to produce 324m-334m tonnes of iron ore this year, according to Mr Jacques.

About 60 per cent of Rio’s workforce in the Pilbara commutes from Perth or other regional centres, a huge logistical exercise made tougher by the impact of social distancing rules.

To limit the number of flights workers had to take, the company extended fly-in, fly-out rosters from one week on, one week off to two weeks on, two weeks off, said Chris Salisbury, Rio’s head of iron ore. It halved the number of passengers on the flights and has enabled 4,000 of its 11,000 iron ore employees in the state to work remotely from home.

BHP has taken similar steps, focusing on technologies that reduce the need for staff to work on-site. It deployed augmented reality headsets that use video combined with advanced 3D sensing technologies to enable experts 1,300km away in Perth to oversee maintenance of mine equipment remotely.

“We have applied a level of creativity and imagination in order to boost the safety of our staff. And guess what? It also has a productivity outcome,” said Pat Bourke, vice-president of technology at BHP.

The company is trialling its own Covid-19 contact tracing app in Chile, where rates of infection are worse, and if successful it may be rolled out in Australia.

The ability of Australia’s mining groups to continue operating has been a lifeline for the country’s economy, which is facing its first recession in 30 years and unemployment that is projected to hit 10 per cent by June.

Iron ore is Australia’s top export and is set to generate a record A$101bn in export earnings this year, according to government forecasts. The resources sector employs 250,000 workers directly and supports 1m jobs in the supply chain.

“We keep the national economy alive,” said Mark McGowan, premier of Western Australia, referring to the contribution of the resources sector during the pandemic. “Without us the country would be under water.”

BHP, Rio Tinto and Fortescue, which control almost two-thirds of seaborne trade in iron ore, have enjoyed rising share prices since Australia launched its response to the pandemic in early March © Bloomberg

Uninterrupted supply has also insulated Australia’s miners from rising diplomatic tension over Canberra’s call for an inquiry into the origins of the coronavirus. While Beijing has imposed punitive export tariffs and bans on beef and barley exports from Australia, iron ore remains untouched.

“Substitution away from Australia at the current time appears difficult,” said Mr Lawcock.

But there could be a sting in the tail for Australia’s iron ore miners. Some executives said privately that they fear the industry will find itself in the crosshairs as governments increase taxes to pay for their crisis response.

“With Covid-19 having already reshaped global monetary policy, global tax policy is likely to evolve as well, so there could be risks over the coming years, especially if wider economic growth is unable to recover.”