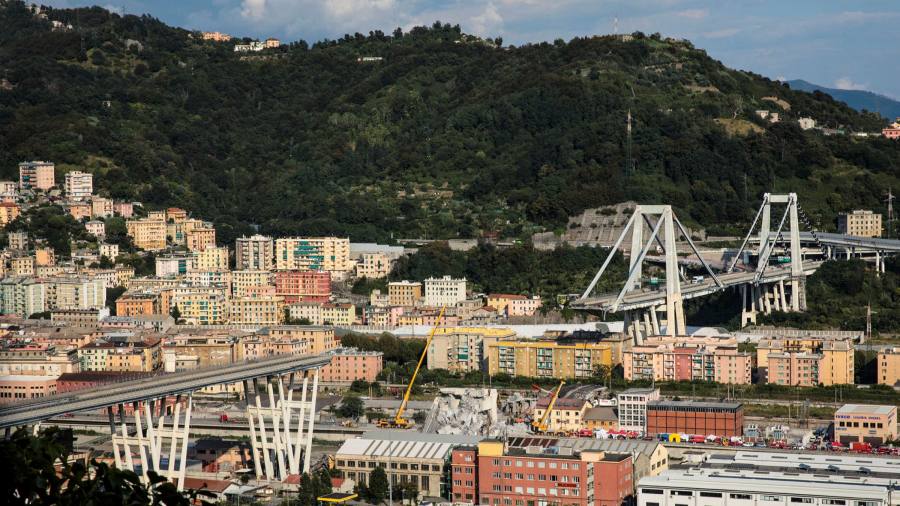 Atlantia, the Italian infrastructure company controlled by the billionaire Benetton family, has accused the Italian government of breaching EU law and called on Brussels to intervene in an escalating dispute over the collapse of a Genoa bridge that killed dozens of people in 2018.

The company’s toll road business, Autostrade per l’Italia, has been at loggerheads with the government over the future of its concessions to operate roads and bridges since the disaster claimed 43 lives in August 2018.

The Five Star Movement, the senior partner in Italy’s coalition government, has vowed to revoke Autostrade’s concessions. The government has until June 30 to decide whether to strip the company of them, which a law passed earlier this year would allow it to do without paying vast compensation.

In a letter sent last week to European Commission vice-president Valdis Dombrovskis, Atlantia’s chairman, Fabio Cerchiai, and chief executive Carlo Bertazzo complained that the new law would allow the government to “dramatically reduce” the compensation it owed the company should it terminate the contract early as well as change the mechanism to set toll road fees.

Without the new law, the government would have to pay €23bn in compensation to terminate Autostrade’s concessions before 2038.

Atlantia’s top management also claimed in the letter that the government would force to it to sell its majority stake in Autostrade to “state owned [Cassa Depositi e Prestiti] at a reduced value creating significant damage to thousands of Italian and foreign investors”.

The company asked Brussels to take “prompt and firm initiative [with] Italian authorities in order to tackle the breach of EU law”, according to the letter, a copy of which was seen by the Financial Times. The letter also stated that Atlantia believed the government’s actions, including the new law passed by decree, violated principles of EU law, including those concerned with respecting contracts and the free market economy.

Atlantia declined to comment. The Italian government and Mr Dombrovskis did not immediately respond to a request to comment.

The company’s decision to ask Brussels to intervene comes after Prime Minister Giuseppe Conte this week said that the future of Autostrade’s concessions had “been dragging for too long and the uncertainty must end”. Mr Conte also said the government would not accept Atlantia’s €3bn offer, which includes discounts on toll roads fees and additional infrastructure investments, as a way to settle the dispute.

The dispute between the government and Atlantia over the concessions is unrelated to a criminal investigation into the collapse of the bridge.

Atlantia will not sell its stake in Autostade at a discount, according to people familiar with the matter. If an agreement cannot be reached, the company will terminate the concessions at the end of the month, pointing to the government’s ability to change the terms of the existing contract, the people added.

The dispute comes as the coronavirus pandemic has battered the Italian economy. Last month, Atlantia sought a €1.25bn state-backed credit line to save it from potential bankruptcy while also starting preliminary talks with several investors to sell a stake in Autostrade.

The company fears the government could reject the request for political reasons. According to two government officials, no decision has been made on the credit line guarantee. A spokesperson for SACE, the state-owned credit agency, declined to comment.

Infrastructure investment is a key pillar of the government’s attempts to drag the economy from the recession created by the pandemic. It is holding a workshop with business leaders, international institutions, labour unions and trade associations this week.