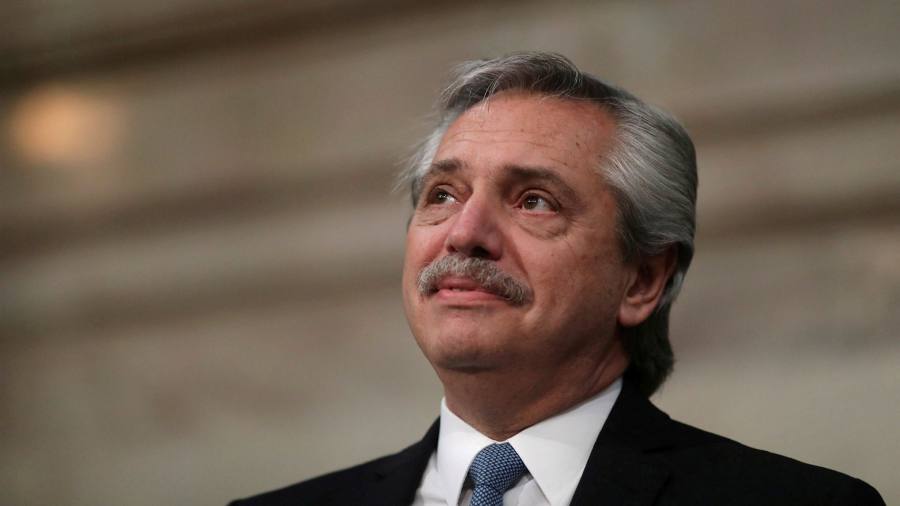 Argentina has announced an improved offer to holders of $65bn of foreign debt, hoping to break a deadlock that has persisted since it defaulted in May.

The latest offer, Argentina’s fourth since the talks began earlier this year, would raise interest payments and cut losses on bondholders’ initial investments, the finance ministry said in a statement on Sunday night.

President Alberto Fernández described the offer as the “maximum effort” that Argentina could make, adding that bondholders would have until the end of August to accept. “I hope that the creditors understand, comprehend, and that Argentine society also understands that asking for a bigger effort means starting to fail to keep the promises made,” he said in a radio interview.

Full details of Sunday night’s offer were not immediately available, but La Nación newspaper reported that the offer was equivalent to a net present value of 53.3 cents on the dollar for bondholders who accepted. The offer is subject to minimum participation thresholds that the government has not yet spelt out.

Interest payments on the new bonds to be swapped for old debt will begin in 2021, a year earlier than in the government’s last offer, and their maturities will stretch until 2046. The ministry said it would send a law to congress ensuring that local law foreign currency bondholders would receive equivalent terms to those offered in the latest offer to foreign law bondholders.

Under the new offer, bondholders would be asked to take a loss of 1.9 per cent on the value of the outstanding debt and would receive an average coupon of 3.07 per cent from the new bonds, La Nación said.

South America’s second-biggest economy is heading for a deep recession this year with some of the world’s highest inflation. Argentina’s government says the country cannot afford to pay its debts of $323bn and has been seeking a restructuring on easier terms. Without a deal, economists fear the country could face deeper stress.

Talks had been close to collapse and only last Tuesday, two bondholder groups representing between them owners of approximately $21bn of Argentine bonds, complained of a “lack of serious engagement” from the Argentina authorities and said there had been no meaningful talks since June 17.

“Time is of the essence and all parties should be focused on avoiding the devastating legal and economic costs of a prolonged default,” the bondholder groups said. No immediate reaction to Sunday night’s offer was available from the group.

A pragmatic leftwinger, Mr Fernández is juggling competing demands from moderates who want a quick debt deal to clear the way for economic recovery and a more radical wing close to former president and current vice-president Cristina Fernández de Kirchner, who favour a harder line.

The IMF, which lent $44bn to Mr Fernández’s predecessor Mauricio Macri in a failed attempt to stabilise the economy, has backed Mr Fernández so far. It has published analysis suggesting that Argentina’s debt burden is unsustainable and that it cannot afford to pay creditors much more than it is currently offering.

Argentina’s default in May was the ninth in the country’s history and comes during one of the world’s longest and strictest lockdowns to combat coronavirus.