“Bring on summer,” said American Airlines as it announced plans to restart more than 55 per cent of its domestic flights in July. Ryanair is offering one-way tickets for as little as €19.99 as it aims to restore 40 per cent of its services next month.

The airlines are rushing to put more aircraft into the skies, but are the passengers ready to fly? Not really. In the UK, 81 per cent of people surveyed in May said that they had no plans to travel outside the country in the next four months, according to UBS Evidence Lab, the bank’s data arm, which has been tracking consumers’ intentions.

Even in countries where coronavirus infections are under tighter control, people are reluctant to head for the airport. In South Korea, more than 80 per cent said in April that they had no travel plans, although a survey in May showed this had fallen to 70 per cent and the number prepared to travel outside Asia had gone up from 6 per cent to 11 per cent. 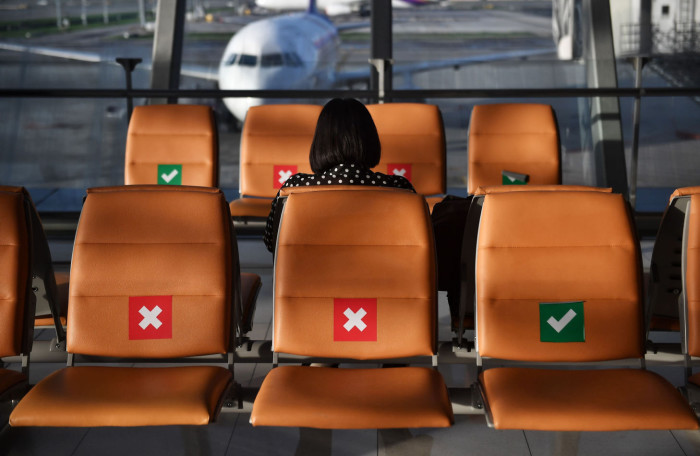 Some passengers who flew in the past few weeks have found the experience strange but not too stressful, if only because they had the airport and aircraft almost to themselves. One traveller who took an American Airlines flight from San Jose to Dallas Fort Worth airport and then to London’s Heathrow in late May told me his overwhelming impression was of the emptiness of the facilities. He saw only two other passengers on the inter-terminal train at DFW — and they were airport staff.

The traveller said the unharried check-in clerk was behind Plexiglas. There were hand-sanitiser stations dotted through the building. There were no queues to get through security and no problems with social distancing at the gate — because so few people were boarding his flight. There was no question of having to sit next to another passenger: there were so few on board that when, after settling into his window seat, someone else sat on the aisle, cabin crew moved him to a three-seat row of his own. Queues for the toilets? There weren’t any.

That will all change if people start flying in greater numbers, as the plans being laid out by airline associations, governments and regulators make clear. It’s important to get these procedures right, the European Union Aviation Safety Agency (Easa) said. In one alarming section of its safety protocol for airlines it said: “An increase in cases of unruly or disruptive passengers should be expected, either prior to departure or in-flight. This may be due to passengers not wishing to sit next to each other or accusing each other of not following the rules. There is a strong potential for conflict if it is not managed properly. In the worst case, panic could become quite a serious threat to flight safety.”

So how do we avoid that? First, dissuade people with possible Covid-19 symptoms from going to the airport. “Passengers should provide a statement regarding their Covid-19 status before being issued a boarding pass,” Easa said, adding that airlines “should make passengers aware of the consequences of making a false statement and the fact that symptomatic passengers detected at the airport may not be allowed to continue their travel”.

Should airports and airlines take passengers’ temperatures as they enter or before they board? There is little evidence that it is effective, Easa says. Earlier epidemics, such as the Sars outbreak, suggested temperature screening was “a high-cost low-efficiency measure”. Covid-19 can be asymptomatic. It can also be infectious before any symptoms appear. If temperature-checking played any useful role, Easa said, it was in dissuading those who are ill from travelling or reassuring those who were that they didn’t have infectious fellow-passengers on the flight.

If you do fly, you will be saying goodbye to your loved ones outside the airport terminal. The UK Department for Transport instructions, issued last week, match Easa’s: the only non-passengers allowed into the terminal will be those assisting a disabled passenger or escorting a child who will be travelling unaccompanied.

Much of airport and aircraft life will mirror what happens elsewhere in these pandemic times: passengers will be told to keep their distance from others and clean their hands constantly. But some older aspects of flying will be turned upside down. This applies particularly to checking in bags and hand luggage. The airlines’ push in recent years has been to deter the checking-in of luggage. The result has been a battle for overhead locker space as passengers have brought as much as they could on board: wheeled suitcases, laptop bags, handbags and whatever else they could get past the flight attendants at the door.

The new rules are: as little hand luggage as possible — check in whatever you can. As both the UK transport department and Easa say: the fewer on-board bags there are, the quicker boarding and disembarking will be and the less chance there is of opening or closing a latch that another hand has touched. Easa says airlines should encourage checking in luggage “by implementing incentive policies”.

A traveller wearing a protective mask and overalls at Changi airport in Singapore, June 9 2020 © Wallace Woon/EPA-EFE/Shutterstock

The pre-pandemic incentive policies went the other way: for many airlines, the more luggage you checked in the more you paid. Are they really going to reverse this? I asked easyJet whether it intended to eliminate or reduce its checked baggage charges, which go up to £37.49 for a 23kg bag. easyJet said it had no current plans to reduce hold luggage charges but would “review” the situation regularly.

Under Easa’s plans, there will no longer be duty-free sales on board. In-flight food should be pre-packed and sealed and drinks should be in cans. Passengers should wear face masks from the moment they enter the airport and throughout the flight. If you’re on a long-haul flight you should bring enough masks to change them every four hours.

If any passenger shows signs after take-off of Covid-19, including “fever, persistent cough, vomiting, diarrhoea, difficulty breathing or other flu-like symptoms”, they should be isolated on board, with two empty rows in each direction if possible, and the closest toilet reserved for the sick passenger.

The whole toilet situation sounds pretty fraught. Even if there are no symptomatic passengers on board, one toilet should be reserved for the crew. Airlines should not allow queues for the others. Ryanair says passengers will have to ask for permission to go to the loo.

None of this sounds much fun, and the airlines, understandably, are keen to assure us that the chances of contracting Covid-19 on a flight are low. The International Air Transport Association’s medical director said there was sparse evidence that a coronavirus-afflicted passenger could infect others on board.

A flight from the US to Taiwan at the end of March that subsequently turned out to have had 12 symptomatic passengers caused no problems for the other 328 passengers and crew members who all tested negative. An informal survey of 18 large airlines identified, from January to March, just three cases of in-flight transmission of coronavirus, all from passengers to crew, and four cases of pilot to pilot infection, which could have taken place during the flight or before or after it.

There were no cases of passenger to passenger transmission on these flights, which was also confirmed in information Iata requested from 70 airlines representing half of global traffic. The only suspected case of large-scale in-flight infection was on a flight from the UK to Vietnam in early March in which one passenger was thought to have infected 14 others, 12 of whom were sitting nearby. Iata said a formal study into this flight was expected to take place.

It helps, Iata said, that passengers all face the same direction, that they are protected from those in front and behind by seat backs, that cabin air flow is from ceiling to floor and that modern planes have high efficiency particulate air (Hepa) filters that are effective at trapping viruses.

Will this be enough to persuade millions to fly? Possibly not at first. That will probably take a worldwide vaccination programme or widespread immunity through past infection, and we are a long way from that. As Iata concedes, the numbers who have had the disease are still low — and we don’t know how long immunity lasts. But the queues prepared to enter shops after a long lockdown suggest many are itching to get back to normal. If the price is right this summer, a fair number may want to get away. But for now, flying looks like an activity for the young and less vulnerable — or the reckless and the brave.