Americans have spent about $2bn more on alcohol in stores since the start of March than last year, but drinks companies are warning that the surge is failing to compensate for a collapse in business from restaurants and bars.

Some drink makers have said they are straining to meet demand for some products as industry data show that sales to retailers, which were initially pushed higher by pre-lockdown stockpiling, have remained at elevated levels for several weeks.

By the middle of last month, retailers’ total alcohol sales had reached almost $9bn over the seven-week period, according to figures from data provider IRI. Sales of spirits including tequila and gin leapt 39 per cent to $1.3bn and wine jumped by 28 per cent to $2bn. Beer rose 20 per cent to $5.5bn.

The upheaval in buying patterns is causing a headache for the industry, which is scrambling to ramp up production for retailers while also dealing with the slump in “on premise” sales.

“It’s a really challenging time for us, not just for our business but for everybody in our industry,” Gavin Hattersley, chief executive of Molson Coors, said in an earnings presentation last week. 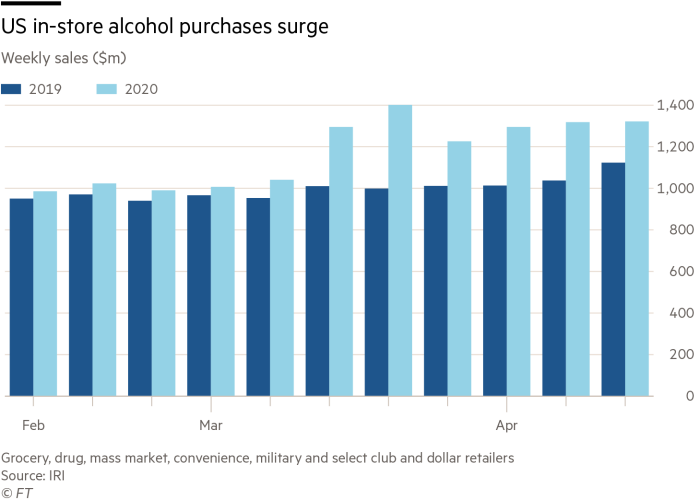 Drinking at home was not enough to offset a slump in “on premise” sales for Molson Coors, whose net sales fell 8.7 per cent in the first quarter from a year ago.

The company, whose brands include Blue Moon as well as Miller and Coors, reported a net loss of $117m and is reducing capital expenditure by about $200m in response to the crisis.

Mr Hattersley said the company was running “pretty much flat out” to meet demand from retailers for some products, particularly large packages.

Lester Jones, chief economist of the National Beer Wholesalers Association, said: “I’m confident there will be plenty of beer, although I don’t know if it’s going to be in the right packages and the right formats that people expect.”

He added: “Given that we all planned months ago to have a very different market, we have to quickly adjust to the new reality.”

Analysts predict its quarterly results to show a decline in sales volumes in the US — the largest market for AB InBev, which also makes Beck’s and Corona — because of the closure of bars and restaurants in the final weeks of March.