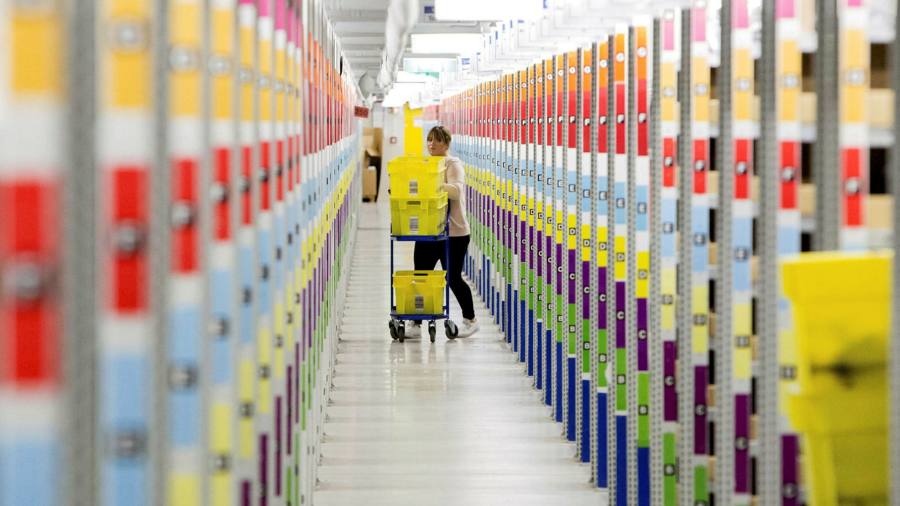 At least 2,000 Amazon warehouse workers in Germany have gone on strike over safety concerns relating to coronavirus, after a surge in cases at two of its fulfilment centres reignited tensions over the company’s efforts to protect staff.

Employees at six Amazon facilities did not clock into work on Monday, according to the union Verdi, which has demanded that the company sit down with it to negotiate a collective agreement on health protection at work and better pay.

The strike, which the union said would last for “at least” two days, comes as up to 40 Amazon workers at two fulfilment centres in the central German town of Bad Hersfeld have tested positive for the virus in the past two weeks.

The town, which hosts Amazon’s largest fulfilment centre in Germany with 2,800 workers and a smaller site with 800 people, sits roughly 200km south-east of Rheda-Wiedenbrück, where a recent outbreak at a meat processing plant fuelled a jump in Germany’s coronavirus reproduction number to its highest level in weeks.

Verdi has criticised Amazon for not slowing down production targets for workers wearing face masks, which can make it more difficult to breathe.

It also argued that Amazon’s policy of only confirming whether workers had become sick, but not how many or which shifts they worked on, had made it hard for staff to assess their risk.

“The main problem is the lack of transparency, meaning workers don’t know if there’s any problem in a fulfilment centre,” said Andre Scheer, trade union secretary at Verdi. “When colleagues disappear, are they ill or in quarantine?”

Since the start of the pandemic, Amazon has faced protests and strikes in the US, Italy and France, as employees oppose what they see as insufficient measures to protect their safety. Last month the company suffered its toughest blow yet, as a vice-president and top engineer quit in protest after Amazon fired whistleblowers who had raised concerns about the safety of colleagues in warehouses.

Amazon would not comment on the new German infections, but said that more than 60 per cent of its 13,000 workers in the country had been with the company for more than five years, which it said “proves that we are a fair employer”. It added the strikes had so far not affected customer orders in Germany, its largest market outside the US.

The company, which has warned that coronavirus costs could wipe out gains from the surge in sales since the pandemic erupted, said it had ordered 21m pairs of gloves and 19m face masks and shields as part of its safety precautions for workers in Germany.

Verdi has been in dispute with Amazon for years, demanding that the online retailer align its pay with collective agreements in the retail and mail order sectors.

“Amazon rejects all collective agreements and refuses to negotiate with trade unions [on pay], therefore they also refuse to negotiate about health protection and security at work,” Mr Scheer said.