The mass protests that have gripped America in the wake of George Floyd’s death in Minneapolis last week have been centred on outrage at police brutality and racial injustice targeting black communities.

But they have also been underpinned by frustration that African-Americans still suffer from a large economic gap compared with the rest of the country when it comes to wealth, income and wages, even after the longest US expansion on record and despite record-high pre-pandemic stock markets.

“What we have experienced since the last recession is that those disparities were not minimised, we did not see systematic improvement in people’s economic wellbeing, and we are seeing some of the ramifications of this now,” said Amanda Cage, chief executive of the National Fund for Workforce Solutions, who has spent years working to help distressed neighbourhoods on the south side of Chicago.

On Tuesday afternoon, President Donald Trump touted his record on economic issues affecting black communities in a tweet, saying he had done “more” for them “than any president since Abraham Lincoln”, citing a scheme to foster investment in low-income neighbourhoods, the passage of criminal justice reform, and low unemployment, poverty and crime.

Many economists describe the past 10 years as the US recovered from the Great Recession as a missed opportunity, however.

There’s a lot of unrest in general, with economic instability, due to inequality

African-American households are still disproportionately reliant on low-wage labour, under-represented in business and equity ownership, and unable to share in many of the gains happening elsewhere. That is on top of endemic concerns about lack of access to quality healthcare, housing and education.

“The recovery gave precedence to capital over labour,” said Dania Francis, assistant professor of economics at the University of Massachusetts in Boston. “Even though profits may have been going up, we saw stagnant wages.”

In 2018, the median household income for a black family was $41,361, having grown by 3.4 per cent over the previous decade, according to the latest US Census Bureau data. This compared with a median income of $70,642 for non-Hispanic white families in 2018, which had grown by 8.8 per cent since the 2008 crisis.

According to a report published in February by the Brookings Institution, a Washington-based think-tank, the net worth of a typical black family in 2016 was $17,150, while the equivalent figure for a white family was 10 times greater at $171,000 — leading its authors to conclude that American society “does not afford equality of opportunity to all its citizens”.

“In terms of catching up [on wealth and income] there’s still a long way to go,” said Gerald Daniels, assistant professor of economics at Howard University in Washington. “There’s a lot of unrest in general, with economic instability, due to inequality,” he added.

Ms Cage highlighted the lack of economic progress in some black communities vividly last October at an event hosted by the Federal Reserve, when she described unemployment in South Side neighbourhoods like Englewood and Fuller Park as exceeding 15 per cent, even when national joblessness was hovering around 4 per cent.

Those conditions have been dramatically exacerbated by the pandemic, she told a similar US central bank event two weeks ago. Many workers had been laid off and small businesses shuttered, while those who did retain jobs were in frontline positions that exposed them to health risks, at a time when the coronavirus itself was disproportionately spreading in low-income neighbourhoods.

“These workers are really facing a difficult equation, risking their physical health or making ends meet,” Ms Cage said. “And this isn’t a hypothetical question for these folks. If you live in a black neighbourhood in Chicago, you know of somebody who has died from coronavirus.”

Floyd’s death was another devastating blow on top of all these factors. “I don’t think you can separate some of the economic disparities from health disparities . . . and then layered on top of that this feeling of powerlessness in the face of government, and in this case government being police,” said Prof Francis. “These things are inextricably linked.” 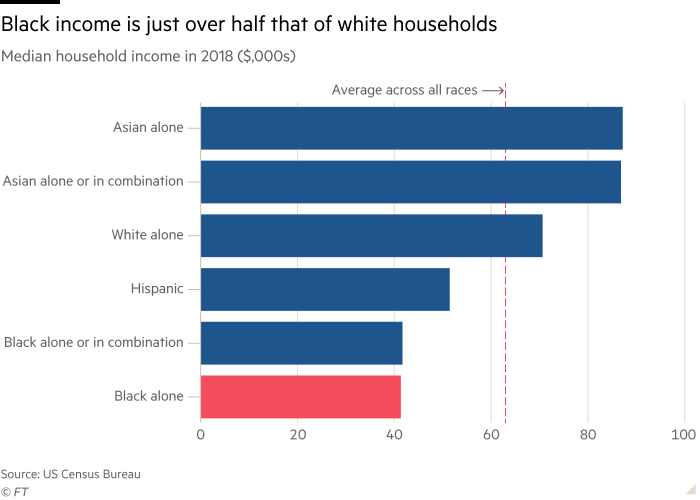 Some lawmakers push for slavery reparations and baby bonds

In the near term, one big question in terms of economic support for black neighbourhoods is whether Congress and the White House will be able to agree on a new round of cheques for American households, in addition to the $1,200 per individual earning less than $75,000 per year already sent.

There is also a raging debate on Capitol Hill about the fate of federal unemployment benefits worth $600 per week introduced as part of a $2.2tn pandemic stimulus package, which ran out in July. Democrats are keen to extend them, but Republicans and the White House are resisting on the ground that they disincentivise the return to work.

The current crisis may spur debate about deeper — and more controversial — policy changes to address the economic disparity suffered by black communities.

Some lawmakers, activists and economists have been pushing for slavery reparation payments to black households, as well as so-called baby bonds, which would be savings instruments afforded to every child, and wage guarantee schemes that would help workers have some economic stability. All would be a huge political lift.

“There are structural inequalities that are responsible for a lot of disparities we see today, and any solution that doesn’t address those is not going to be successful,” said Prof Francis.

Regardless, Ms Cage said that thinking about “racial equity” in the labour market, the “racial dynamics of unemployment”, and “occupational segregation” — plus ways to recognise that blacks often hold some of the riskiest but essential low-wage jobs — was likely to be much more pervasive during this crisis, after being “absent” during the past one.

“The world has changed,” she said. “There will be more attention paid to that.”

Last October, Amanda Cage, a workforce development expert from Chicago, spoke out at a Federal Reserve event to warn that all was not well with the labour market in her city. In certain predominantly black neighbourhoods on the South Side, like Englewood and Fuller Park, unemployment rates were still hovering at “catastrophic” levels above 15 per cent, much higher than the national average of 4 per cent at the time, Ms Cage said.