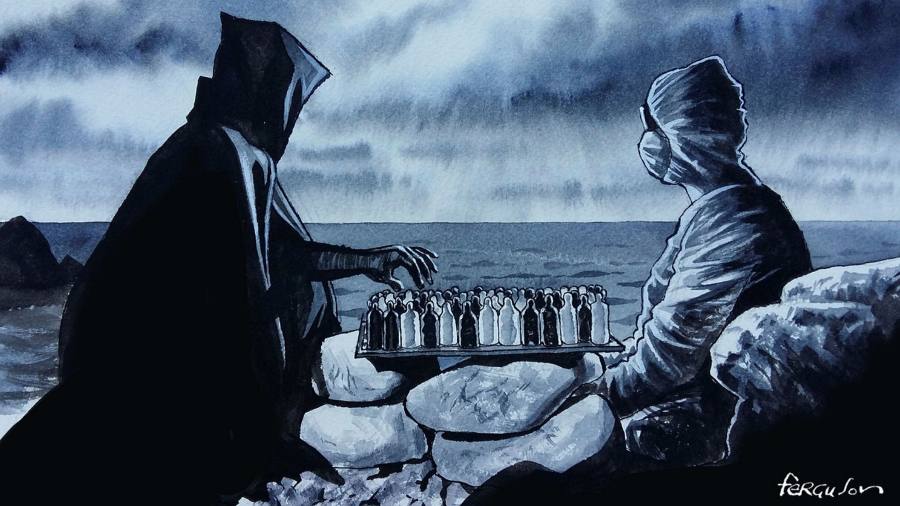 There is something ghoulish about the way the rest of the world is watching Sweden’s experience with the coronavirus pandemic.

The country’s refusal to go for a hard lockdown has seen it hailed by rightwing populists around the world. By contrast, the liberal left in much of Europe and America seems almost eager to hear that the experiment has ended in disaster and despair.

Inevitably, the actual situation in Sweden stubbornly refuses to conform to the ideological biases of the outside world. On balance, the pessimists seem to be winning the argument. But this model for tackling coronavirus has very little to do with libertarianism or rightwing populism. Instead, it looks like a very Swedish sort of failure — linked to a left-leaning country’s excessive faith in its own scientific prowess and bureaucratic elite.

It is not that Stockholm has simply ignored Covid-19. Gatherings of more than 50 people have been banned and new health facilities built. Swedes were advised to practice social distancing and many have chosen to work from home. But the policy has generally rested on recommendations, rather than law. Schools, shops, restaurants and gyms have stayed open. The country’s goal was to keep society and the economy running, while preventing the health service from being overwhelmed, and moving rapidly towards “herd immunity”.

In some respects, Sweden has benefited from its more relaxed approach. The country’s children have not had to suffer the consequences of school closures. But the export-oriented economy has not been spared a sharp contraction. And the Covid-19 death rate looks shockingly high compared with neighbours that went for a tougher lockdown. Sweden’s per capita death rate is roughly 10 times the level of neighbouring Norway. There have even been days, in recent weeks, when the death rate per head has been the highest in the world.

It is true that Sweden’s overall mortality rate is still lower than some other countries that have instituted much stricter lockdowns — notably Britain. But there is less evidence that Sweden has succeeded in “flattening the curve” of infection. Swedes have also been stung to see Nordic neighbours — such as Denmark and Finland — opening their borders to each other, but not to Sweden.

Faced with these signs of failure, domestic criticism of Stockholm’s Covid-19 policy is becoming louder. One longstanding critic is Lena Einhorn, a virologist and prominent intellectual. Dr Einhorn told a recent seminar, held by Cambridge university’s Centre for Geopolitics, that she regards her country’s policy as “madness” — and very much at odds with its normal approach of “taking very good care of its citizens”. She added: “It has thrown a wrench into my whole concept of a stable, sane Sweden.”

Dr Einhorn fears that the main gainers from a policy failure over Covid-19 will be the Sweden Democrats, a far-right opposition party with roots in the neo-Nazi movement. But the fact that it is the far-right that has led the criticism illustrates how difficult it is to fit Sweden’s story into a global narrative that tries to pit “irresponsible” rightwing populists against “responsible” centrist governments that “follow the science”. The Swedish prime minister, Stefan Lofven, is a Social Democrat. And one distinctive aspect of the country’s approach is the way the policy has been formed and presented by scientists and technocrats — with Anders Tegnell, the country’s chief epidemiologist, becoming both the public face of Sweden’s approach and something of a national icon.

Paradoxically, it may be Sweden’s very success as a nation that led to its apparent failure over the pandemic. A self-image as a country that is superrational and modern means that Sweden is confident and cohesive enough not to follow the international consensus. Instead, policymakers have chosen to trust their own judgment. But Swedish self-confidence may have shaded into an arrogance about the country’s supposedly superior rationality, which then led to policy errors.

Nicholas Aylott, a professor of politics at Södertörn University in Stockholm, draws a parallel between Sweden’s pandemic policies and its handling of the refugee crisis in 2015. In both cases, the country stood out from the international crowd because of its distinctive and radical approach. But, in both cases, the Swedish exception did not work out very well.

For a long period, Sweden offered automatic asylum to all Syrians — a policy more liberal even than Germany’s. Ironically, Sweden’s ultra-permissive policy attracted scorn from many of the same American rightwingers now praising it over Covid-19. Sweden’s distinctive refugee policy was initially a source of national pride. But, eventually, the government conceded that it was unsustainable, and changed course.

Something similar may now be happening over coronavirus. As Mr Aylott sees it: “In Sweden, there is often near national consensus for a long time, then suddenly a brick falls out of the wall and everything changes.”

With Covid-19 — as with refugees — there was nothing malicious about the country’s decision to follow its own path. Sweden’s failure — if that is what we are witnessing — should be a source of sadness, rather than schadenfreude.