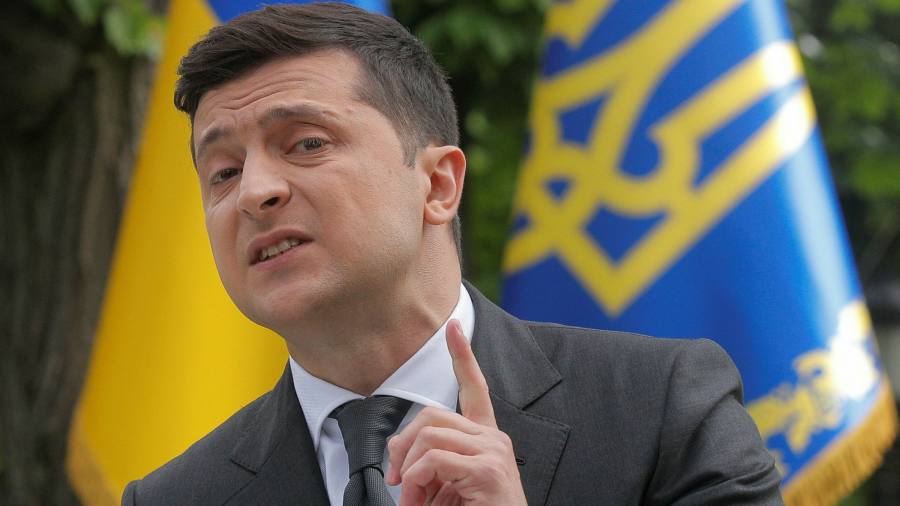 In Servant of the People, the comedy show that propelled Volodymyr Zelensky to the Ukrainian presidency, the politically inexperienced hero who becomes head of state finds ingenious ways of securing IMF funds and outwitting reform-resistant oligarchs. If life imitated art, Ukraine would be as popular with its western backers as Mr Zelensky’s show is with millions of the country’s viewers.

Mr Zelensky scored a notable success last month when the IMF agreed to extend $5bn to Ukraine in balance of payments and budget support. In return, he committed his administration to prudent economic policies and a crackdown on corruption, a central promise of the campaign that swept the novice politician to victory in last year’s presidential election.

There remains much sympathy for Mr Zelensky in western capitals. But it is mixed with apprehension about whether he has the political skills and determination to be the truly reforming leader that Ukraine has needed since independence in 1991. These emerging doubts should give pro-western Ukrainians pause for thought. A vigorous reform effort will reinforce the willingness of the country’s US and European friends to stand by Kyiv in its conflict with Russia and Moscow-backed separatists in eastern Ukraine.

The concerns are on several fronts. First, the abrupt resignation this month of Yakiv Smolii as central bank governor disturbed the IMF and private sector investors. They admired Mr Smolii and the bank as models of integrity and professionalism.

Mr Smolii’s charge that he had been subjected to “systematic political pressure” was aimed partly at legislators allied to Igor Kolomoisky, an oligarch who backed Mr Zelensky’s presidential bid and whose media group aired his TV show. But it also appeared to reflect frustration at the president’s criticisms of Mr Smolii’s interest rate and foreign exchange policies. Kyrylo Shevchenko, Mr Smolii’s replacement, lacks his predecessor’s solid record as a reformer.

Mr Poroshenko, an oligarch known as the “chocolate king” for his confectionery business, is perhaps not the most squeaky-clean politician. But Kurt Volker, a former US special envoy to Ukraine, hit the nail on the head when he said: “With everyone guilty of something, the choice of whom to prosecute is a political decision.”

Third, Mr Zelensky has failed to maintain discipline in his party, named Servant of the People after his show, and displays a puzzling eagerness to get rid of high-level policymakers, some with strong reformist credentials. In 14 months, he has not only lost Mr Smolii’s services but dismissed Oleksiy Honcharuk as prime minister, Oksana Markarova as finance minister, Tymofey Mylovanov as economy minister and Ruslan Ryaboshapka as prosecutor-general. The last three were all respected reformers.

To his credit, Mr Zelensky has made some progress. A new law that introduces proportional representation for national parliamentary elections, should reduce the scope for corruption. In long-overdue reforms of the agriculture and energy sectors, his administration has passed a land sales law and separated the gas production company from the transmission network of state-owned Naftogaz.

Last but not least, Mr Zelensky has pushed through legislation intended to prevent Mr Kolomoisky from reclaiming ownership of PrivatBank, which was nationalised in 2016 as part of an IMF-backed clean-up of the financial sector. This measure was essential for unlocking the fund’s aid package, and a bold step which indicated that, contrary to the early misgivings of some reformers, Mr Zelensky should not be written off as a Kolomoisky puppet.

All that said, the road ahead for Mr Zelensky promises to be difficult. Like the EU countries with which Ukraine’s economy is increasingly aligned, the pandemic has struck the country hard. According to OECD projections, Ukraine may suffer a 7.7 per cent contraction in economic output this year.

Most seriously, the Donbass conflict is no closer to a solution than when Mr Zelensky took office. Any compromise with Russia risks a backlash from millions of Ukrainians who regard concessions to Moscow as a sellout of Ukraine’s interests and identity. Western support for the country is a precondition of a workable peace settlement. But to keep that support, Mr Zelensky must stay on the reform path.