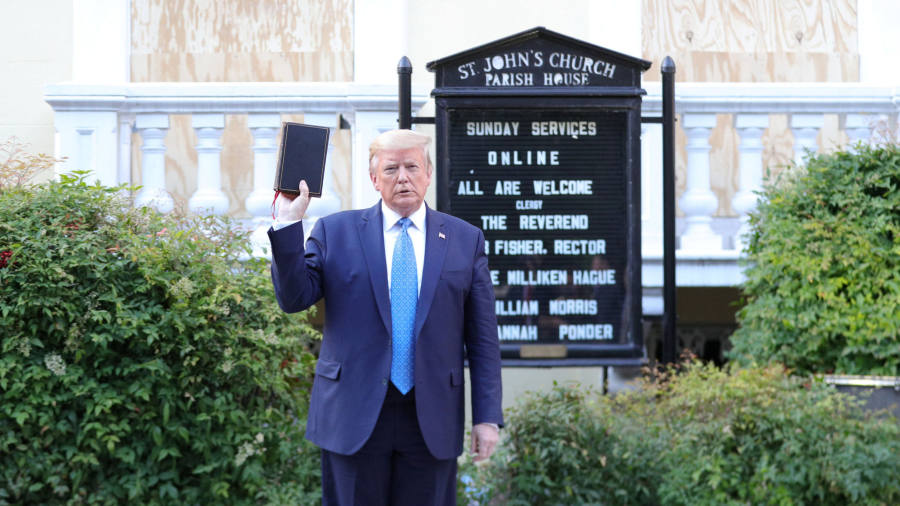 Log on to Twitter for a masterclass in gall. What claims to be the account of Iran’s supreme leader shows his concern for America’s downtrodden. The Turkish president is “deeply saddened” at their lives under an “unjust order”. As for China, one official opts merely to quote the late George Floyd. “I can’t breathe,” said the man whose death after police arrest has set off US-wide protests.

America’s internal schisms are being used against it, and used well, with the soft touch and irony that autocrats are meant to lack. But then there is so much to work with.

The dividedness of the US — racial, material, political — is aired thoroughly enough as a domestic blight. It is the effect on its foreign policy that can get lost in the anguish. If the US is riven, it must also be hampered in its outward actions. And nowhere will it suffer more than in the superpower duel.

The US-China rift is so cheaply likened to the cold war that we forget how much more unified America was back then. When it took on the Soviets, it was fresh from the bonding trauma of the second world war. Republicans and Democrats did not just have bipartisan manners, but shared policies: a mixed economy, anti-isolationism, foot-dragging on civil rights. Immigration had been too low for too long to test the country’s sense of itself. Trust in government was so high as to implicate Americans in Old World deference. The distribution of incomes was much flatter than it is now. Politics rarely spilled on to the street.

With all the due caveats about silent tensions (and, in McCarthyism, loud ones), the US that set out on the cold war was a nation of almost quaint togetherness. It could be mobilised for an open-ended contest against a far-off rival.

Achieving the same trick now would tax a Lincoln or a Roosevelt. It is not just a week’s urban unrest that has to be overcome, but two or three decades of calcified partisanship. If another cold war is afoot, the US goes into it with less of the cohesion that primed it for the first. The best it can hope is that the causal link runs the other way: that an external foe is what brings citizens together. If so, the process is slow in working.

As they consider the inflamed streets, Americans of some vintage will shiver with memories of the late-1960s. It is important to follow that thought a bit further. What the turmoil over civil rights and the Vietnam war ultimately brought was a change in world affairs: the cold-war breather we know as detente.

The US saw that it could not tussle with the Soviets while its own house was in such disrepair. It had to sue, if not for peace then for a modus vivendi, at least until it felt robust again. Foreign policy could not endlessly buck domestic weakness.

Nor can it now. If anything, the US is even less cohesive in 2020. Detente-era Washington was still a bipartisan place, with Republicans renouncing their own president, Richard Nixon, and some Supreme Court judges being confirmed near-unanimously. It is now a pit of bad faith. Nor was income inequality such a sore point before the market reforms of the 1980s. It is now entangled with the race question and the Covid-19 pandemic.

For reasons of pride or strategy, confronting China might be still be right. But it matters that it coincides with the most fractured time in national life for half a century. The least to be said is that those who will the confrontation should not stoke the disunity.

And so to the president. Donald Trump did not etch the faultlines into his society, but he picks at them with rare abandon. We know well enough that he will not desist out of good conscience. Much odder is that he rejects the geopolitical case for doing so.

If he wants the US to bed down for an indefinite struggle against China, he must know that it cannot also be so nakedly at odds with itself. The president can have discord at home, or he can have a tenable showdown abroad. It is ever harder to see how he can have both. A true hawk would be sweetly emollient in domestic politics.

Instead, the president touts a Bible (unconvincingly) and pledges to get rough (convincingly). Protesters are dispersed not far from the White House. In Washington, the ambient sound comes from vigilant helicopters. The past week is said to have been Mr Trump’s most divisive yet. As such, it was also the worst for his foreign goals.