It is late October and Donald Trump has a surprise for you. Unlike the traditional pre-election shock — involving war or imminent terrorist attack — this revelation is about hope rather than fear. The “China virus” has been defeated thanks to the ingenuity of America’s president. The US has developed a vaccine that will be available to all citizens by the end of the year. Get online and book your jab.

It is possible Mr Trump could sway a critical slice of voters with such a declaration. The bigger danger is that he would deepen America’s mistrust of science. A recent poll found that only half of Americans definitely plan to take a coronavirus vaccine. Other polls said that between a quarter and a third of the nation would never get inoculated.

Whatever the true number, anti-vaccine campaigners are having a great pandemic — as indeed is Covid-19. At least three-quarters of the population would need to be vaccinated to reach herd immunity.

Infectious diseases thrive on mistrust. It is hard to imagine a better Petri dish than today’s America. Some of the country’s “vaccine hesitancy” is well grounded. Regulators are under tremendous pressure to let big pharma shorten clinical trials. That could lead to mistakes.

Vaccine nationalism is not just about rich governments pre-ordering as many vials as they can. It is also about winning unimaginably large bragging rights in the race to save the world. Cutting immunological corners could be dangerous to public health.

Such caution accounts for many of those who would hesitate to be injected. The rest are captured by conspiracy theories. In the battle between public science and anti-vaxxer sentiment, science is heavily outgunned. It faces a rainbow coalition of metastasising folk suspicions on both the left and the right. Public health messages are little match for the memology of social media opponents.

It is that mix of technological savvy and intellectual derangement that drives today’s politics. Mr Trump did not invent postmodern quackery — though he has endorsed some life-threatening remedies. The irony is that he could fall victim to the mistrust he has stoked.

Video: Coronavirus: the global race for a vaccine | FT Interview

Should an effective vaccine loom into view before the US goes to the polls in 95 days, Mr Trump would not be the ideal person to inform the country. The story is as old as cry wolf. Having endorsed the use of disinfectants and hydroxychloroquine, Mr Trump has forfeited any credibility. Validation should come from Anthony Fauci, America’s top infectious-diseases expert, whose trust ratings are almost double those of the president he serves.

Even then, however, the challenge would only just be starting. There is no cause to doubt the world-beating potential of US scientific research. There are good reasons to suspect the medical establishment’s ability to win over public opinion.

The modern anti-vaxxer movement began on the left. It is still going strong. It follows the “my body is my temple” philosophy. Corporate science cannot be trusted to put healthy things into our bodies. The tendency for modern parents to award themselves overnight Wikipedia degrees in specialist fields is also to blame. 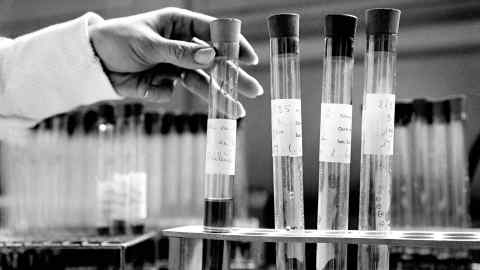 Not all of this mistrust is madcap. African Americans have good reason to distrust public health following the postwar Tuskegee experiments in which hundreds were infected with syphilis and left to fester without penicillin. Polls show that more blacks than whites would refuse a coronavirus vaccine. Given their higher likelihood of exposure, such mistrust has tragic potential.

But rightwing anti-vaxxers have greater momentum. America’s 19th century anti-vaccination movements drew equally from religious paranoia that vaccines were the work of the devil and a more general fear that liberty was under threat. Both strains have resurfaced in QAnon, the virtual cult that believes America is run by a satanic deep state that abuses children.

It would be hard to invent a more unhinged account of how the world works. Yet Mr Trump has retweeted QAnon-friendly accounts more than 90 times since the pandemic began. Among QAnon’s other theories is that Covid-19 is a Dr Fauci-led hoax to sink Mr Trump’s chances of being re-elected. Science cannot emulate such imaginative forms of storytelling.

All of which poses a migraine for the silent majority that would happily take the vaccine shots. Their lives are threatened both by a pandemic and by an infodemic. It is a bizarre feature of our times that the first looks easier to solve than the second.